I visited Toronto in early March 2010 and as I left the country I passed through the usual security check at Pearson International Airport. What made it different is that the next passengers after me in line were a man, a small child, and a person in niqab. (I write “person” rather than “woman” as I hardly know who was under the niqab outfit.)

Curious how the niqabi’s hidden identity would be handled, I looked back as the trio was dealing with the security agent. To my astonishment, the agent did not demand to see the niqabi’s face but was content to see those of the man and child. I wanted dearly to video this procedure on my mobile phone but dared not, thinking that this could well get me hauled in on some charge that I, ironically, was breaching security.

This experience comes to mind as I follow a current story about a similar situation at Montreal’s Trudeau International Airport. The Toronto Sun explained on August 1 how Mick Flynn of Bradford, England, was boarding a flight there on July 11

when he witnessed two women with their faces covered board an Air Canada Heathrow bound flight without being asked to remove their veils. In fact, in the video that Flynn has posted online, a man traveling with the group hands in all the passports and is the only one to interact with airline staff while two veiled women simply walk through.

Unlike me, Flynn did something about this outrage: “I complained at the desk — and again as I boarded the plane — asking if the pilot was happy that two women boarded without being identified. Both members of staff whom I spoke to were flustered and clearly embarrassed.”

In a public statement, Air Canada insisted that “Airline passengers have already undergone multiple security checks before arriving at the boarding gate. A final check is made at the gate prior to boarding in order to confirm passengers on the flight.” This, of course, is mumbo-jumbo. Then, to make the story even richer, Air Canada has threatened a lawsuit against Flynn for his video.

A day later, the Sun followed up with a report from Pearson:

A veteran airline worker at Canada’s busiest airport said few veiled Muslim women are forced to reveal their faces before boarding flights. The long-time frontline worker at Toronto’s Pearson International Airport said there is no clear-cut policy given to airline workers on how to deal with this and other sensitive issues. … employees working with various airlines in Toronto, Montreal and Ottawa said that checks often occur at the luggage check counter, if at all, and that women who refuse to show their faces are simply allowed to board.

The veteran Pearson worker said there are many factors that have led to what he deems a security risk: The lack of a clear policy from airline management, worries about political correctness, and often aggressive behaviour from men traveling with veiled women. “In general, what happens is the woman stands at the back, the man comes up with the documents. He’s quite aggressive and leaves little room for airline workers to challenge him. … So, why would a general worker who is paid $12-$15 per hour take this upon themselves?”

Transport Minister John Baird issued a statement promising to look into the matter. “If the reports are true, the situation is deeply disturbing and poses a serious threat to the security of the air travelling public. If our current security policies in this area are deemed to be lacking, our government will take the necessary steps to protect the safety and security of the travelling public.” Today, Baird came out with a more assertive statement:

“I’m the minister of transport, they validate my ID every the time,” Baird told Ottawa radio station CFRA. “I do have one cabinet colleague that was denied entry to a plane because he forgot his valid ID at home. … We’re going to get the facts first and then we’re going to take all the action necessary to make sure that the current regulations are followed and followed to the letter.”

As for setting up special rooms where Muslim women can remove their veils away from other passengers, Baird dismissed the idea as unworkable. “I have no intention of establishing special rooms at every single gate so that we can validate someone’s identification,” said Baird. “This is Canada, we’re an open society, we’re a society where men and women are treated equally.”

He also stated that anyone, veiled or otherwise, who puts up a fuss at airport security and refuses identity checks, ought to be arrested. “If people are intimidating and threatening airport workers doing security checks, we won’t tolerate that in Canada. We’re seeking 100% compliance not 99%.”

(1) It’s hard to say something original about this preposterous situation. Obviously, niqabis must not get a free pass onto planes. If anyone wants a few dozen reasons why, just go to my blog on “Niqabs and Burqas as Security Threats.” 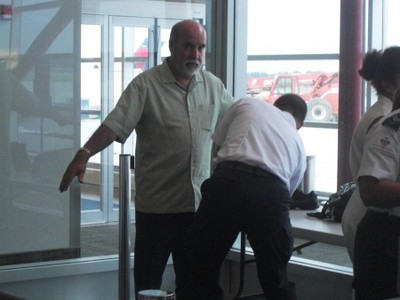 The senior pastor of Christ Reformed Church in Anaheim, California, getting frisked in Canada.

apparently, American Reformed ministers are viewed as a security risk by Canadian authorities! Here I am getting frisked in front of a bunch of my fellow ministers and synod attendees on the same flight out with me (hence the photo). I’ll bet the security people were looking for Cuban cigars – the contraband most likely to be found on a Reformed minister’s person.

(3) It’s fascinating to see the impact of a single low-quality video. Next time, I must not let the opportunity pass me by. (August 3, 2010)

Aug. 4, 2010 update: I have received a copy of the Airport Pre-board Passenger Screening Course: Participant Manual published by Transport Canada, and agency of the Canadian government and dated July 2002. Of particular interest is the section titled “Passengers With/Wearing Objects of Sensitive, Cultural or Religious Significance” on page 5-18: 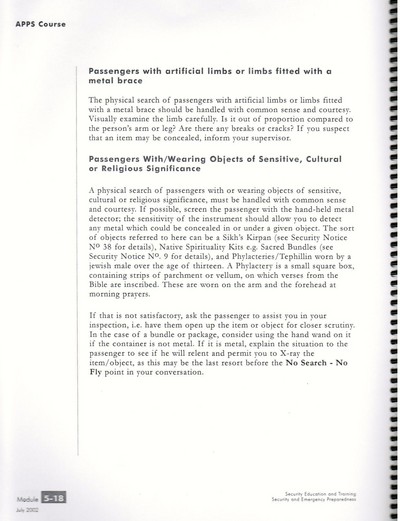 A physical search of passengers with or wearing objects of sensitive, cultural or religious significance, must be handled with common sense and courtesy. If possible, screen the passenger with the hand-held metal detector; the sensitivity of the instrument should allow you to detect any metal which could be concealed in or under a given object. The sort of objects referred to here can be a Sikh’s Kirpan (see Security Notice No 38 for details), Native Spirituality Kits e.g. Sacred Bundles (see Security Notice N°. 9 for details), and Phylacteries/Tephillin worn by a jewish male over the age of thirteen. A Phylactery is a small square box, containing strips of parchment or vellum, on which verses from the Bible are inscribed. These are worn on the arm and the forehead at morning prayers.

If that is not satisfactory, ask the passenger to assist you in your inspection, i.e. have them open up the item or object for closer scrutiny. In the case of a bundle or package, consider using the hand wand on it if the container is not metal. If it is metal, explain the situation to the passenger to see if he will relent and permit you to X-ray the item/object, as this may be the last resort before the No Search – No Fly point in your conversation.

(1) I presume new versions of the manual have come out over the past eight years, so this text should be seen as an indication of current practice, not an exact guide.

(2) The focus here on phylacteries and tephillin is doubly curious, given that neither of them contain any metal and neither would conceivably ever be worn while going through the security check at an airport.

(3) Yet more curious is the mention of Sikh, Native Spiritualist, and Jewish religious items – but nothing about Islamic turbans, kufis, hijabs, jilbabs, niqabs, and burqas.

(4) Strangest of all is the unique focus on searching the item in question and the absence of mention here or anywhere else in the manual of identifying the person covered by niqabs and burqas. It’s as though the whole issue of covered individuals does not even exist.