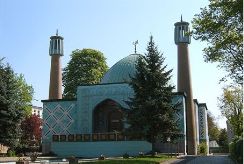 Germany has shut down a small Hamburg mosque once used by 9/11 terrorists and where a jihadist society prays and spreads an ideology that authorities say is “hostile to democracy.” Mohammed Atta, one of the suicide pilots in the 9/11 attacks, frequented the Taiba mosque, which investigators said has been a base for terrorists.

The closure comes a week after New York rejected an attempt to block building a giant mosque at Ground Zero.

Der Spiegel reported that many of the 250 Muslims who crowded into the Hamburg mosque’s prayer room every Friday include converts to Islam and men with radical beliefs. Its Taiba society members claim to represent a true Islam that is void of Western influences and which backs “resistance” against foreign forces, including German soldiers, in the war against terror in Afghanistan.

Ten Hamburg jihadists traveled to the Afghanistan border area last year to undergo training by terrorists. One of them was an Iranian who urged German Muslims to join an armed struggle, according to Der Spiegel.

One of the most prominent preachers has been German-Syrian businessman Mamoun Darkazanli, is on the European Union’s list of terrorists and is prohibited from running a business or opening a bank account. He lives off of state stipends.

Darkazanli was questioned after the 9/11 attacks because he had been linked with the hijack terrorists, but he never was charged.

An Interior Ministry official that Bergmann described him as a “hate preacher. He is wanted by Spain on charges of being associated with Al-Qaeda and financing Osama Bin Laden, but German investigators concluded there was not enough evidence to warrant extradition.

by Maayana Miskin The Palestinian Authority continues to incite young schoolchildren to armed struggle against Israel in its textbooks –...