The proposed legislation would put the sunshine state at the forefront of the anti-immigrant moves rapidly sweeping across the US. 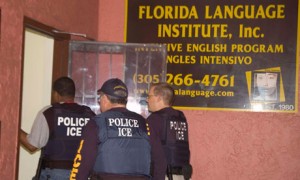 Officers from US Immigration and Customs Enforcement raid a language school in Miami in March. Photograph: Courtesy of ICE

Architects of the plans boast they will be the harshest anti-illegal immigration laws yet, a claim that could have an incendiary effect in Florida given the state’s high proportion of Latinos.

Bill McCollum, Florida’s attorney general, is the main proponent of the clampdown. He said the legislation would “provide new enforcement tools for protecting our citizens and will help our state fight the on-going problems created by illegal immigration. Florida will not be a sanctuary state for illegal aliens.”

Under the proposals, police would be required to investigate the immigration status of anyone they stopped whom they suspected of being illegally in the country. Any suspects lacking papers would be liable to up to 20 days in jail after which time they would be handed over to the immigration services for deportation.

In an innovation that goes beyond anything tried in Arizona, the Florida law would allow local courts to impose longer prison sentences and tougher bail conditions on anyone committing a crime in the state who is found to be undocumented.

Critics of the increasingly hostile mood of local politicians in states across America towards illegal immigrants accuse them of pandering to popular white prejudices towards Hispanics in order to garner electoral support.

In Florida’s case, McCollum is currently embroiled in a close electoral fight to gain the Republican party’s nomination for governor of the state ahead of elections in November.

His Republican rival for the candidacy, Rick Scott, accused McCollum of devising policy specifically for electoral gain. His spokesman told the Miami Herald: “It’s clear the only way to get McCollum to take any action on anything is when he’s down in the polls.”

McCollum and his supporters in Florida are highly mindful of the fact that Arizona’s attempt to force the police to check on the immigration status of suspected undocumented workers has been blocked by the federal government in a legal dispute that is likely to go all the way to the supreme court.

McCollum claims to have avoided a similar challenge from the Obama administration by being more specific about the circumstances under which officers are obliged to check immigration papers.

In particular, McCollum said the proposed new rules would avoid any whiff of racial profiling against Hispanics — an accusation widely levelled at Arizona where the vast majority of undocumented residents are Mexican.

Under the planned law, police would need to have a concrete reason for suspicion such as an altered driving licence or an admission from the suspect that they were in the country without permission.

“It’s not how you look, it’s not what you say,” McCollum said.

Despite his insistence that his proposals would be less likely to provoke federal intervention, they are likely to face a challenge. The Obama administration is alarmed that immigration policy is spinning out of its control as individual states seek to make their own rules.

U.S is Broke, Let’s Face It

By: Dan Weil Economists agree that if the U.S. government doesn’t get its fiscal house in order soon, a crisis...