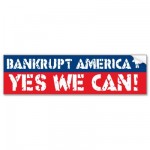 Economists agree that if the U.S. government doesn’t get its fiscal house in order soon, a crisis will ensue.

But Lawrence Kotlikoff, an economist at Boston University, says the crisis already is here.

“Let’s get real. The U.S. is bankrupt,” he writes in a column for Bloomberg. “Neither spending more nor taxing less will help the country pay its bills.”

Using Congressional Budget Office data, Kotlikoff figures the government has a fiscal gap of $202 trillion, more than 15 times the official debt level. The difference stems from the smoke-and-mirrors accounting we use for Social Security, Medicare and Medicaid.

“The annual costs of these entitlements will total about $4 trillion in today’s dollars,” as baby boomers retire, Kotlikoff writes.

“Yes, our economy will be bigger in 20 years, but not big enough to handle this size load year after year.”

And what will be the outcome?

“The first possibility is massive benefit cuts,” Kotlikoff says. “The second is astronomical tax increases. And the third is the government simply printing vast quantities of money.”

We will probably see a combination of all three results, he writes. And that will entail “dramatic increases in poverty, tax, interest rates and consumer prices.”

The debt buildup has him “betting on the collapse of government bonds,” he said at a Johannesburg conference, Bloomberg reports.

U.S. Economy Near Point of No Return

By: Dan Weil -The Federal Reserve’s decision to expand its quantitative easing by purchasing more Treasuries is a dangerous one,...