By: B. Lopiccolo – First hearing about the Mosque at Ground Zero I noticed it Spanish sounding name  Cordoba.  The question was is that an Arabic name, Spanish name, why the name Cordoba House? 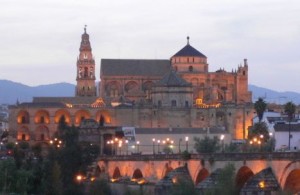 In searching for clues as to why this Spanish sounding name, I was surprised in what I found.  If you think the name Cordoba sounds more Spanish than Arabic  your correct, it is indeed a Spanish name.  Why did these Muslims choose to use a Spanish name in a religion originated in Arabic?

We’ll have to go back a few years to 786 to find the rood of this name.  The Islamic Moors  under Tarik Ibn Zezad a Muslim, conquered Spain with brutal force in the Battle of the Basque in an agenda to take over Spain in the name of Islam.

The conflict was a bloody one, Tarik was victorious and soon became the master of Spain.  As a tribute to their victory the Muslims under Tarik wanted to a monument that reflected the victory of Muslims over Spain.

In 786, Abd al-Rahman forced the Christians out of the Church tore down what was then Saint Vicente church, a Christian church built in the Visigothic period (5th C) . In its place the Moors erected the first section of a  Mosque in its place, re-using much of the church’s materials.  This Mosque was located in Cordoba, Spain,  known at that time as the Mosque of Cordoba or the “Mezquita”.

The Mosque at Ground Zero is a clear monument to the military component of Islam. Built on the site of a military victory, just like in Spain to show the power of Islam.

The Great Mosque of Córdoba was converted back into a Christian church in 1236 after King Ferdinand III of Castile recaptured the city from the Moors. The building later became the modern-day Cathedral of Our Lady of the Assumption.

To this day it is  illegal for Muslims to pray on this site in Spain.  Demetrio Fernández González, the recently appointed Bishop of Córdoba, reinforced a ban on Muslims praying in any part of the 24,000sq m (260,000sq ft) building, saying that canon law did not permit it. 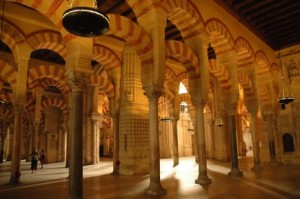 Notice the great selection of columns taken from San Vicente church (whose floor was recently revealed beneath the Mezquita’s floor) and other ruins. The ceiling was raised by means of using a double arch, which was inspired in Segovia’s Roman aqueduct.

A statement from the bishop’s office said: “The shared use of the cathedral by Catholics and Muslims would not contribute to the peaceful coexistence of the two beliefs.

Ground Zero has been conquered, and make no mistake the name Cordoba is used to reflect the  victory on Sept 11, 2001 in the eyes of the imam behind the Ground Zero mosque, whom happens to have an irresistible attraction to extremists and terrorists. The imam attended the Hizb-ut Tahrir conference in 2007. A group that has been banned in Germany, Jordan, Syria, Lebanon, Egypt, Tunisia, Turkey, Kazakhstan, and Saudi Arabia.

In Case You Missed It:  9-11-2001 NEVER FORGET
Posted in Terrorism and tagged Europe, Islam, New York.

A must watch absolutely frighting video of Muslim Imam preaching to a approving and  clapping audience of Muslims on how he wants to sneak anthrax through the Mexican border and kill...