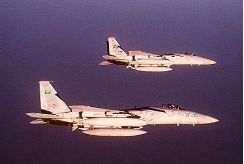 F-15: Saudi and US pilots over Iraq

Saudi Arabia’s shopping list for American-made weapons has swelled to $60 billion, double the amount estimated for the previously announced purchase of 84 F-15 warplanes.

The oil kingdom now is interested in 132 attack helicopters worth another $30 billion, but the Obama administration insists, “The proposed sale of this equipment and support will not affect the basic military balance in the region.”

A long-standing American policy has been to maintain a military advantage to Israel, which has been under attack from Arab neighbors in six major wars and prolonged battles since the War of Independence in 1948.

The American military-industrial complex, a phrase coined by General Dwight D. Eisenhower when he completed his two-term presidency in 1960, will be kept busy with the proposed sales at a time when the American economy faces a possible “double-dip recession.”

The sale of $40 billion in military weapons to Saudi Arabia, Kuwait and other Arab countries, considered by the United States to be allies, was proposed in the Bush administration.

Israel has succeeded in preventing the inclusion of certain advanced systems that military experts said could endanger the Jewish State if they were used against it. The proposed sales to Saudi Arabia might have been the trigger that prompted Defense Minister Ehud Barak Sunday to announce that Israel will buy the new American-made F-35 Joint Strike Fighter, which would help maintain military superiority. The F-35 is far superior to the F-15, according to American defense officials. Years ago, Israel asked the U.S. not to sell F-15s to Saudi Arabia.

As far back as four weeks ago, Israel was reported to be on the verge of announcing the purchase of the F-35s, but no decision has been made, at least not publicly.

The background to the sales is Iran, whose threat to become a nuclear power and dominate the Middle East has made it a common enemy of Saudi Arabia, Israel, and although more distant, the United States.

“To preserve the American-backed regional order, Arab nations expect us to stop the Iranians, a security arrangement that has been clear since the Carter administration,” columnist Lee Smith wrote in the current edition of Newsweek magazine. “What’s new is that if we don’t step up, the Arabs’ unlikeliest ally, Israel, may have to do it.”

Pollard Day at the Malls and Intersections

by Hillel Fendel One thousand young idealists, the vast majority of whom were not born when Jonathan Pollard began his...