The Greek Orthodox Archdiocese of America accused New York officials on Tuesday of turning their backs on the reconstruction of the only church destroyed in the Sept. 11 attacks, while the controversial mosque near Ground Zero moves forward. 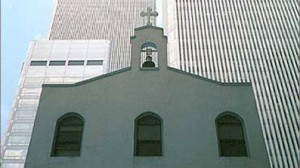 The sidelined project is the St. Nicholas Greek Orthodox Church, a tiny, four-story building destroyed in 2001 when one of the World Trade Center towers fell on top of it. Nobody from the church was hurt in the attack, but the congregation has for the past eight years been trying to rebuild its house of worship.

While the mosque project cleared red tape earlier this month, negotiations between the Port Authority of New York and New Jersey and the church stalled last year — and will not be revived, according to government officials. Though the particulars of the two projects are completely different and on the surface unrelated, the church and its supporters see a disconnect in the way the proposals have been handled.

An archdiocese official said Tuesday that the situation has created “consternation” for those still struggling to jump-start talks over the church.

“We have people that are saying, why isn’t our church being rebuilt and why is there … such concern for people of the mosque?” Father Alex Karloutsos, assistant to the archbishop, told FoxNews.com. He said “religious freedom” would allow a place of worship for any denomination to be built, but accused officials with the Port Authority of making no effort to help move the congregation’s project along.

“Unfortunately, they have just been silent — dead silent, actually,” said Karloutsos, whose father was ordained at St. Nicholas. “They just simply forgot about the church.”

Within a year, the deal fell through and talks ended. Port Authority officials told Fox News that the deal is dead.

The archdiocese and Port Authority offer sharply conflicting accounts of where things went wrong. The Port Authority has previously claimed the church was making additional demands — like wanting the $20 million up front and wanting to review plans for the surrounding area. They say the church can still proceed on its own if it wishes.

“The church continues to have the right to rebuild at their original site, and we will pay fair market value for the underground space beneath that building,” a spokesperson with the Port Authority told Fox News.

But Karloutsos called the Port Authority’s claims “propaganda” and said the church has complied with all conditions. He said the government should honor agreements that date back to 2004, under former New York Gov. George Pataki.

Pataki, speaking with Fox News on Tuesday, agreed that the church should be rebuilt.

“I don’t understand it,” Pataki said. “Why the Port Authority now has so far put roadblocks in the way of its reconstruction is beyond me. It’s not the right thing to do.”

“For the last year, the Port Authority has refused to meet with church officials and is now reneging on its commitment to rebuild the church,” Demos said.

Demos said the stalled church plans are an “outrage,” considering New York City’s Landmarks Preservation Committee vote in early August to deny historical status protection to the building where the mosque is set to be built, clearing the way for the project to move forward.

The church project has not attracted the kind of national attention the mosque has. President Obama injected the mosque into the national political conversation when he appeared to endorse the plans at a Ramadan dinner at the White House Friday. The White House later clarified that Obama was supporting the developers’ right to build the mosque, not the project itself.

The president’s comments set the stage for mounting criticism from Republicans, who widely oppose the project and now want other Democrats to declare where they stand on what for months was a largely local issue.

Mayor Michael Bloomberg, who has supported the church as well as the mosque, defended the mosque proposal Tuesday.

“I think it will add to the diversity of the area,” Bloomberg said. As for Obama’s comments, he said: “He understands the Constitution and the Bill of Rights as well as anyone.”

In Case You Missed It:  California Gov. Gavin Newsom Brags About Being the “First Jurisdiction in the World” to Ban Sale of Gas-Powered Vehicles (VIDEO)
Posted in Tyranny and tagged Islam, Terrorism.