Many economists are worried about the possibility of a double-dip recession, but former Bank of England official David Blanchflower thinks it could be much worse than that if the Bush tax cuts aren’t extended. 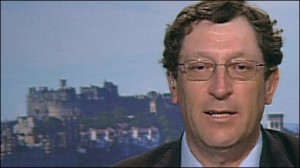 “If we don’t act fast, a plunge into Depression is a growing risk in . . . the U.S.,” he writes in a column on Bloomberg.

“The so-called Bush tax cuts, which are scheduled to expire at the end of the year, should be extended as soon as possible.”

President Barack Obama and Democrats in Congress want to keep the cuts only for those with income of less than $200,000, while Republicans want the reductions to continue for everyone.

The weak economy begs for the tax cuts, implemented in 2001 and 2003, to be continued, says Blanchflower, now an economics professor at Dartmouth College and the University of Stirling in Scotland.

The Federal Reserve’s recent decision to buy more Treasuries is a positive step, he says.

“But banks aren’t lending and firms need incentives to hire, so the Fed move isn’t enough, especially since quantitative easing will take time to work.”

The whopping $49.9 billion trade deficit in June doesn’t help either.

“It’s time for tax cuts, which have the added advantage that they work quickly,” Blanchflower writes. “Firms respond to incentives.”

Rather than being eliminated, the Bush tax cuts should be adjusted to maximize job creation, he says.

In addition to extending the cuts, Blanchflower likes the idea of suspending the payroll tax, half of which is paid by workers, for 12-18 months.

“Households would experience an immediate 3.5 percent increase in disposable income that they could employ to sustain consumption and pay down debts,” Blanchflower says, citing American Enterprise Institute estimates.

“And it would give an incentive to hire. This would inject an additional $625 billion a year and would jumpstart the economy.”

Martin Regalia, an economist for the U.S. Chamber of Commerce, also says erasing the Bush tax cuts would have dire consequences, killing the economy’s chances for recovery.

“That’s what you’re suggesting, is a corporate bullet in the head,” he said at a conference, The Hill reports.

“The prudent middle ground would be to forestall any tax increases in 2011 and to phase in higher rates on upper-income households in 2012, when the economy will be on firmer ground,” he writes in The New York Times.

Tensions Rise in Greece as Austerity Measures Backfire The austerity measures that were supposed to fix Greece's problems are dragging...