The controversial imam at the center of the debate over the construction of a mosque near Ground Zero says his goal is to create coalitions across the religious divide, but during a 2005 conference in Australia, he said America may be worse than Al Qaeda. 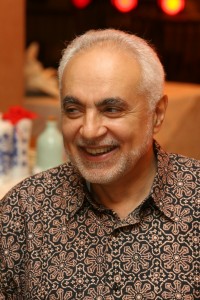 “We tend to forget, in the West, that the United States has more Muslim blood on its hands than Al Qaeda has on its hands of innocent non-Muslims,” said Imam Fiesal Abdul Rauf, speaking at the Bob Hawke Prime Ministerial Center during a question and answer session dedicated to what sponsors say was a dialogue to improve relations between America and the Muslim world.

“You may remember that the U.S.-led sanctions against Iraq led to the death of over half a million Iraqi children. This has been documented by the United Nations,” said Rauf, who called himself a spokesman for Islam.

But diplomats and others, including former President Bill Clinton, have said that sentiment is wrong. Saddam Hussein’s regime corrupted then-U.N. sanctions and denied humanitarian aid to his own people.

In a Nov. 8, 2000, interview on Pacifica Radio, Clinton said if any child is without food or medicine, then Saddam is to blame because the dictator is “lying to the world and claiming the mean, old United States is killing his children.”

During his Australian visit, the imam also said the Arab and Muslim world senses that the West does not care about Muslim lives and their pain and anguish is not heard.

He explained that frustration and emotions can lead to terrorism, actions he condemned.

“Acts like the London bombing are completely against Islamic law,” Rauf said. “Suicide bombing, completely against Islamic law, 100 percent, but the facts of the matter is that people, I have discovered, are more motivated by emotion than logic. If their emotions are in one place and their logic is behind, their emotions will drive their decisions more often than not.”‘

Raud added that having homes and lives destroyed does not justify “bombing innocent civilians” or “actions of terrorism.”

“But after 50 years of — in many cases — oppression, of U.S. support of authoritarian regimes that have violated human rights in the most heinous of ways, how else do people get attention?” Rauf asked, explaining, “I’m just providing you with the arguments that are happening intra-Islamically by those who feel the emotion of pain.”

The center that sponsored the discussion says the imam was presented in the interest of open debate and discussion. Rauf’s office has not yet responded to a request for reaction about his earlier comment.

The imam is currently on a taxpayer-funded State Department trip to the Mideast, where he is serving as a representative of the United States.

In Case You Missed It:  Boulder Shooter is ISIS Sympathizer, Living Leftists Manifestation of the Effects of Leftism
Posted in Terrorism and tagged Islam, New York, Terrorism.

Will the High Court Order Destruction of Mosques?

by Elad Benari Two mosques in Judea and Samaria may soon be ordered to be torn down by Israel’s High...