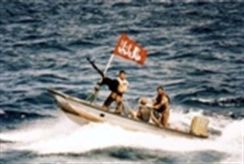 Iran announced Monday its growing arsenal soon will include homemade two high-speed missile-launching assault boats to patrol the Persian Gulf. The statement came one day after the Islamic Republic showed off a new unmanned aerial bomber, which Iranian President Mahmoud Ahmadinejad called an “ambassador of death” to its enemies, particularly Israel and the United States.

The new assault boats are aimed at fending off any attempts by the West to impose a blockade of the Gulf, through which 40 percent of the world’s gas and oil flows in tankers.

The official Iranian news agency IRNA said the two Iranian-produced speedboats, dubbed Seraz and Zolfagar, will help “provide security to the Persian Gulf, the Sea of Oman and Strait of Hormuz.”

Defense Minister Ahmad Vahidi said that the Zolfagar vessel “is designed for quick assaults on ships, and is equipped with two missile launchers, two machine guns and a computer system to control the missiles.” It is to be equipped with a marine cruise missile that Vahidi claims “has high destructive power.”

The announcements of the new drone bomber and missile-launching speedboats were part of “government week” publicity of Iran’s military technology successes. The government also said it will be able to place a man in space in 15 years.

Iran’s growing arsenal includes the Shahab missiles, which may be in possession of Hamas terrorists in Gaza.  Its short-range missiles can reach up to 650 miles, and intelligence sources estimate Iran is working on a long-range intercontinental ballistic missile that could reach targets thousands of miles away.

The BBC's flagship documentary programme produces a fair and balanced report on what happened on board the Mavi Marmara. The...