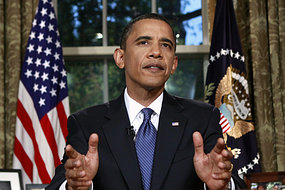 The for and against citizen’s demonstrations are a civil right, but in his own remarks on the Ground Zero Mosque, Obama seems to have forgotten which country he heads.

President Obama’s defense of the right of Muslims to build a mosque and Islamic center in New York City turned the issue into one of religious freedom. That was wrong.

Obama’s first priority – like that of every national leader – is to speak for his country and on their behalf. Obama’s refusal to do so, his insinuation that questions raised about a proposed Islamic mega-center near the site of the 9/11

attacks are un-American, unconstitutional, and prejudiced have shamed every American, and the good name of America.

Obama could have defended America; instead, he apologized for it.

Obama might have said that Islam is the fastest growing religion in the US; hundreds of thousands of Muslims have found a home in America since and despite 9/11. He could have said: America has and continues to stand for freedom and democracy. He did not.

He is probably the first American president to malign his own country.

Obama could have explained that American law and values do not support discrimination, certainly not against Muslims; our history proves that.

There are about 2, 000 mosques in the United States, serving about 8 million Muslims; NYC alone has a dozen mosques.

President Obama could have noted that most American Muslims don’t attend prayer services; mosques are often political and social centers, some which are problematic.
http://www.ghazali.net/amp/html/mosques_in_us.html

According to FBI estimates, 10 % of the mosques in the United States are associated with radical Jihadist ideology. Others estimate that 80% of mosques are dominated by the extremist Wahhabi ideology promoted by Saudi Arabia. And they are allowed to practice, under American principles of freedom of religion.
http://www.newsmax.com/RonaldKessler/Mosques-preach-jihad/2009/11/10/id/336125

Unlike houses of worship in America which are built and supported by the local population, most mosques receive funding from foreign countries, especially Saudi Arabia.

In a particularly disturbing case, the Islamic Development Bank also granted US$295,000 to the Masjid Bilal Islamic Center, for the construction of the Bilal Islamic Primary and Secondary School in California, in 1999. Hassan Akbar, an American Muslim presently charged with a fatal attack on his fellow soldiers in Kuwait during the Iraq intervention, was affiliated with this institution.

In addition, the previously mentioned official website of the Saudi government reported a donation in 1995 of $4 million for the construction of a mosque complex in Los Angeles, named for Ibn Taymiyyah, a historic Islamic figure considered the forerunner of Wahhabism
http://www.nationalreview.com/articles/207366/wahhabism-islam-u-s/stephen-schwartz

President Obama might have noted that the Moslem Brotherhood, a Nazi organization that is banned in Egypt, is associated with some American mosques.
http://www.jihadwatch.org/2010/07/muslim-brotherhood-linked-mosques-arouse-suspicion-across-us.html

A study by Freedom House concluded that “American mosques are filled with Saudi publications that promote hate ideology. All of the books and publications were found to have some connection to Saudi Arabia. According to the study, these publications advanced a “dualistic worldview in which there exist two antagonistic realms or abodes that can never be reconciled, Dar Al-Islam and Dar Al-Har, or Abode of War and that when Muslims are in the latter, they must behave as if on a mission behind enemy lines.”

The study also concluded that these publications “pose a grave threat to non-Muslims and to the Muslim community itself.” The study further found that the “spread of Islamic extremism, such as Wahabbism, is the most serious ideological challenge of our times” and that “[t]he Saudis’ totalitarian doctrine of religious hatred now planted in many America mosques is inimical to our tolerant culture, and undermines the war on terrorism by providing the intellectual foundation for a new generation of Islamic extremists.”
http://www.altmuslim.com/a/a/a/2178

President Obama could have explained that this is obviously not an issue of religious freedom. He could have championed America, its reputation, institutions and values. Instead, he reinforced the view that America is bigoted.

For that, President Obama owes every American an apology.