Peter Schiff– Watching economists and media analysts react to breaking economic news is a bit like looking at a flock of pigeons flying over the New York skyline. A true wonder of the urban landscape, the flocks can include hundreds of individuals who show an uncanny ability to stay in tight formation as the group quickly zig-zags between buildings. What may be even more remarkable than their ability to randomly fly while maintaining cohesion is the flock’s refusal to stick to any particular direction for very long, and their determination to fly feverishly without actually going anywhere. Sound familiar? 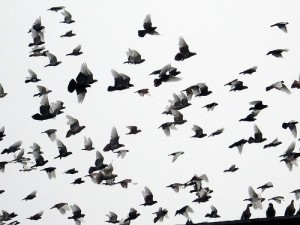 Today’s weak GDP numbers have finally caused the mass of economists to revise downward their formerly optimistic recovery forecasts, with many finally entertaining the possibility of a “double dip” recession. It should be obvious by now that these economists only have the capacity to describe where the economy is moving in the short-term…they have no ability to explain the reasons behind the macro trends or make predictions that go beyond the next data release. But economics is not dart throwing. It can be understood and properly forecast.

The major mental block is that most economists believe that an economy grows as a result of spending. Any policy that encourages spending and discourages savings and investment is considered beneficial. Unfortunately, these policies, which only succeed in growing debt and government, act more as an economic sedative than a stimulant.

On the subject of the “recovery,” I’d like to highlight some of my past predictions, and those of my colleague Michael Pento. With the benefit of hindsight, you can see that although these thoughts were widely dismissed as chronic pessimism at the time of their publication, the current situation supports our conclusions. Although some of our predictions, like for higher bond yields, have yet to materialize.

Michael and I may be birds of a feather, but we don’t blindly follow the flock. We believe economics is a scientific discipline with established laws, and that applying those laws will yield fairly accurate predictions over time. Most other economists say what they need to say to do the bidding of their employer (whether Wall Street or Washington) and maintain the respect of their peers. Good for them, but who should you trust when you are making investment decisions?

Selections from my past commentaries:

“Rather than a recovery, the jobs data seems to indicate that we are still mired in the first economic depression since the 1930s. Increased spending, financed by unprecedented borrowing, will prove to be just as temporary as a job opening at the US Census. When the bills come due, the next leg down will be even more severe than the last. The swelling ranks of the government payroll, and the shrinking number of private taxpayers footing the bill, will guarantee larger deficits and a weaker economy for years to come.”

“It is astounding how many economists, government officials, and Wall Street strategists construe the current economic conditions as evidence of a bona fide recovery. … The myopia leads us to enact policies that actually exacerbate our problems. The “remedies” are postponing, perhaps indefinitely, a true recovery.

The oracles who have described the nature of this imminent recovery do so based on their conviction that consumer spending is slowly returning to levels that existed prior to the recession.

However, missing from their analysis is any plausible explanation as to why consumers will be able to sustain such spending given the plunge in income and credit, and the lack of available savings. But most consumers are tapped out, millions are unemployed, and home equity has been wiped out. The only reasonable thing for them to do is to pay down debt and sock away as much money as possible to rebuild their savings.”

“Over the weekend, top White House economic adviser Lawrence Summers even pronounced that the recession is now over. …

Obama’s claim of success largely derives from the slowing tally of job losses, the seemingly renewed strength in the financial system, the pickup in home sales and home prices, and the positive GDP figures. But these ‘achievements’ fall apart under close examination.

First, a closer look at the jobs numbers shows that employment improved in sectors that benefited most directly from monetary or fiscal stimulus: government, healthcare, financial services, education and retail sales. Meanwhile, sectors such as manufacturing continued to shed jobs at an alarming rate. These dynamics actually exacerbate our economic imbalances.

While it is true that home prices have stopped falling, this represents failure, not victory. True success would be a drop in home prices to a level that homebuyers could actually afford. Instead, we have maintained artificially high prices with tax credits, subsidized mortgage rates, low down payments, and foreclosure relief. With 96% of new mortgages now insured by federal agencies, market forces have been completely removed from the housing equation. With so many government programs specifically designed to maintain artificially high home prices, devastating long-term consequences for our economy are inevitable.”

“In recent interviews, Treasury Secretary Geithner has been almost giddy in his descriptions of the recovery – all the while crediting his own policies for averting disaster. Americans are once again taking the government’s bait by spending money they don’t have to buy things they can’t afford…. But depleting savings and increasing borrowing does not a recovery make.

A prerequisite to any real economic expansion is the potential for business owners to earn profits. With increased regulation and higher taxes on the way, these incentives are being diminished. In fact, via a phenomenon called ‘regime uncertainty,’ our current policy path is actually encouraging businesses to contract in order to prepare for a more hostile business environment. There is no “jobless recovery,” only senseless cheerleading.”

“Because of the continued profligacy of the government and Federal Reserve, the imbalances that caused the current recession have actually worsened. We are now in an even deeper hole than when the crisis began. Rather than wrapping up a recession, we are actually sinking into a depression. If things look better now, it’s just because we are in the eye of the storm.

By holding up over-valued home prices, we prevent the prudent or less well-off from snatching them up and, in doing so, creating a new price equilibrium based upon reality. By maintaining artificially low interest rates, we discourage the very savings that are so critical to capital formation and future economic growth. By running such huge deficits, we further crowd-out private enterprise by making it harder for businesses to invest or hire. Since we have learned nothing from past mistakes, we are condemned to repeat them.”

Selections from the writings of Michael Pento, Chief Economist at Euro Pacific Capital:

“The cause of the Great Depression in the 1930s, and the Great Recession beginning in 2007, was one and the same: an overleveraged economy. Excessive debt levels are the direct result of the central bank providing artificially low interest rates and of superfluous lending on the part of commercial banks.

The easy money provided by banks eventually brings debt in the economy to an unsustainable level. At that point, the only real and viable solution is for the public and private sectors to undergo a protracted period of deleveraging. The ensuing depression is, in actuality, the healing process at work, which is marked by the selling of assets and the paying down of debt. Unfortunately, our politicians today are focused on fighting this natural healing process by promoting the accumulation of more debt.”

“The pending downfall will surprise the many investors who have been tricked into believing that a government can print and spend its way to prosperity.

Many economists also believe that the consumer will spend us into a viable recovery. They are mistaken here as well. Household debt as a percentage of GDP was “just” 46% back in 1983–that was the last time the unemployment rate was 10%. Today household debt is 96% of GDP. That’s correct; consumers have more than twice the level of debt as they did during the last serious recession. Can they be counted on to pile on more debt at this juncture?

In order to believe the economy is on the brink of a lasting recovery we need to see that banks are lending money to the private sector in order to purchase capital goods that are used to create wealth. However, total loans and leases at commercial banks were down 7.7% in December from a year earlier. The only money banks are lending is to the government. Without capital being extended to small businesses they cannot expand production or hire new employees.”

“If the Treasury and Federal Reserve truly believed the economy and the stock market were on a sustainable recovery path, talk of extending and increasing the home buyer’s tax credit would be off the table. The Fed would already be reducing the size of the monetary base. The truth, however, is that no one in government really believes in this recovery. If they did, they would be hiking interest rates and the deficit would be shrinking.

The government’s realization of our precarious economic condition means its largess will continue. Near term, that may ease some pain. So did the artificial stimulus that gave rise to the housing boom. In the end, a protracted period of a near-zero interest rates, along with endless economic stimulus, will spawn another bubble and not a genuine recovery.”

(ANSAmed) - BEIRUT, AUGUST 25 - Lebanon should provide itself with a nuclear power plant for civilian purposes as Iran...