Barack Obama has just given the United Nations jurisdiction to go after the State of Arizona and the 22 other states that are attempting to enforce the immigration laws that he refuses to enforce. 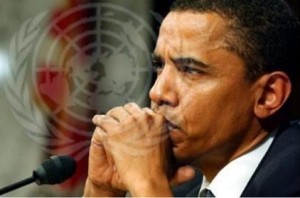 Unfortunately, you read that right. On August 20, the United States, for the first time ever, submitted a 29 page “Universal Periodic Review” (UPR) to the UN Human Rights Council which outlines a laundry list of alleged human rights abuses supposedly committed by the United States. Obama to put the domestic policy of the United States, more specifically its immigration policy, under the scrutiny of the U.N. is treasonous.

Of course, the UPR is pure rubbish, but it’s also much more than an opportunity for Barack Hussein Obama, the Apologist-In-Chief, to bad-mouth America to the rest of the world. Contained within that laundry list of so-called abuses is a direct condemnation of S.B. 1070, legislation enacted by the State of Arizona (and supported by two-thirds of the American people), which seeks to do the job that the federal government has refused to do… secure the border.

According to the UPR: “A recent Arizona law, S.B. 1070, has generated significant attention and debate at home and around the world. The issue is being addressed in a court action that argues that the federal government has the authority to set and enforce immigration law. That action is ongoing; parts of the law are currently enjoined.”

The submission of this UPR is the first step in a United Nations review process which will culminate with the issuance of a plan of action, approximately 90 days from now, from a panel of UN bureaucrats from France, Japan, and Cameroon.

And yes… the United States would be expected to “voluntarily” comply with the UN panel’s recommendations, but as the UN Human Rights Council states on its website: “The Human Rights Council will decide on the measures it would need to take in case of persistent non-cooperation by a State….”

In short, Barack Obama has upped the ante. Not content with simply filing a frivolous federal suit against the people of Arizona, Obama has transformed his amnesty feud with the American people into an international human rights cause and effectively placed the people of Arizona (and the 22 other states that are considering similar border security legislation) under the jurisdiction of a triumvirate of America-hating United Nations bureaucrats.

Barack Obama has just given the United Nations jurisdiction to go after the State of Arizona and the 22 other states that are attempting to enforce the immigration laws that he refuses to enforce.

In Case You Missed It:  SoCal: America First Rally in Anaheim Cancelled, ‘We Have a Duty to Call Out Speech That Doesn’t Reflect Our City and Its Values’
Posted in Tyranny and tagged Arizona, Obama, United Nations.

Iran: Dimona is in Our Crosshairs

by Gil Ronen An unnamed senior officer in the Iranian Revolutionary Guards warned Thursday that Iran would strike Israel if...