Arizona Governor Jan Brewer angrily demanded yesterday that the White House withdraw their report to the UN Human Rights Council that singled out Arizona’s law as a cause for concern about the American track record on human rights. Calling such a reference “downright offensive” in her letter to Hillary Clinton, Brewer also called the entire report “internationalism run amuck”: 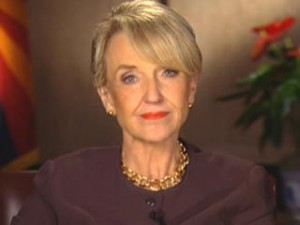 Arizona Gov. Jan Brewer demanded Friday that a reference to the state’s controversial immigration law be removed from a State Department report to the United Nations’ human rights commissioner.

The U.S. included its legal challenge to the law on a list of ways the federal government is protecting human rights.

In a letter to Secretary of State Hillary Clinton, Brewer says it is “downright offensive” that a state law would be included in the report, which was drafted as part of a UN review of human rights in all member nations every four years.

“The idea of our own American government submitting the duly enacted laws of a state of the United States to ‘review’ by the United Nations is internationalism run amok and unconstitutional,” Brewer wrote.

Not only is it internationalism run amuck, it’s both ridiculous and hypocritical at the same time. We submitted the report to the HRC out of some idiotic notion of equality with all nations, which might make sense if the HRC was comprised of free nations that allow their citizens to fully participate and freely speak in their politics. The members of the council to which the Obama administration submitted that letter include Egypt, Saudi Arabia, Cuba, China, and other paragons of human rights. Apparently, Kim Jong-Il and the DPRK were too busy to get named to the council.

The Obama administration has opposed the Arizona bill, but not even Eric Holder could make a legal case that it violated human rights. Instead, the DoJ attacked it on federal supremacy in immigration affairs, essentially a technicality, by claiming that Arizona had tried to pre-empt federal immigration-control efforts. If the Obama administration really believed that this is a human-rights “concern,” then why didn’t they bother to make that claim in federal court? Instead, Obama and Clinton just decided to use it as a cheap moral-relativist point in their new version of an apology tour.

The entire submission should be withdrawn, and the Obama administration should apologize to the people of Arizona for the insult.

In Case You Missed It:  PRE-PLANNED: Weeks before covid appeared in U.S., Congress redefined the word "vaccine" to include mRNA injections
Posted in Freedoms and tagged Arizona, Clinton, Illegal Immigration, United Nations.