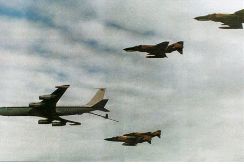 Dr. Mordechai Kedar, an expert on Arab politics and Islamic Fundamentalism at the Begin-Sadat Center for Strategic Studies warns that Iran may be planning a full takeover of Persian Gulf states. He is also concerned that Hizbullah terrorists in Lebanon may try to build a nuclear reactor similar to Iran’s Bushehr reactor, and obtain atomic weapons that could be used against Israel.

In a blog post which appeared on News1, Dr. Kedar says that there are several reasons that pressure is building between Iran and the Arab states in the Persian Gulf:

Firstly, Arab states in the Gulf believe that Iran’s saber-rattling and aggressive statements towards Israel are actually a decoy, aimed at shifting the focus from its real purpose, a full takeover of the oil and gas-rich Persian Gulf. Kedar says that the Arab states remember Iran’s takeover of three Persian Gulf islands, and also its claims that Bahrain belongs historically to Iran.

Secondly, Arab states assess that Israel and Iran will not attack each other, since each side is fearful of the outcome of such attack and its necessary counter-attack. Iran, says Kedar, knows that Israel has 200 – 300 nuclear warheads, which could wipe out all of its major cities. On the other hand, Israel, says Kedar, is concerned about the Iranian arsenal of long-range missiles in Hizbullah’s possession, which are far more accurate that those the Hizbullah used in the 2006 attack against its southern neighbor.

Thirdly, in recent years, tens of thousands of Iranian citizens have immigrated to other Arab states in the Gulf. Kedar says that Arab leaders fear that many of these ex-Iranians are actually sleeper cells, who, when activated, could supply Iran with the necessary intelligence information to successfully stage an attack on Arab Gulf states. Kedar brings evidence that the Iranian sleeper cell concept has credence, citing the call of an Arab minority organization in Iran which called on Arabs in Gulf states to cooperate with their local authorities in order to expose Iranian sleeper cells in their countries. These words, says Kedar, came after several Iranian cells were in fact exposed in Kuwait, cells which planned to attack Kuwait’s top military echelons in the event of a U.S. or Israeli attack on Iran. This led to the replacement of Iran’s ambassador in Kuwait, says Kedar, who Kuwaiti authorities believed was the mastermind behind the sleeper cells. Kedar warns that even Israel should be wary of Iranian sleeper cells among its own foreign worker population.

Kedar adds that the purpose behind Iran’s revealing of its new unmanned plane last week, was to warn Arab Gulf states not to dare help Israel or the U.S. in an attack on Iran, or to let Israeli or U.S. jets fly over their air space. Such an unmanned plane, says Kedar, could potentially enable Iran to hit any major target in the Gulf states, and Iran’s message to those states is clear: “do not cooperate with an attack on us.”

Finally, Kedar warned that the next dangerous threat against Israel could be a Hizbullah attempt to imitate Iran’s nuclear ambitions, by building a nuclear reactor in Lebanon, similar to Iran’s Bushehr reactor. Kedar says that Hizbullah chief Hassan Nasrallah must be overjoyed that the Bushehr reactor went operational without being attacked by Israel or the U.S. and that this must encourage him to pursue the building of a similar reactor in Lebanon, purportedly under the guise of the need to generate electricity, but for the actual goal of building nuclear warheads for use against Israel.

Dr. Kedar finishes by saying that it is a grave error to underestimate one’s enemies.

Dr. Mordechai Kedar (Ph.D. Bar-Ilan U.) Served for 25 years in IDF Military Intelligence specializing in Arab political discourse, Arab mass media, Islamic groups and the Syrian domestic arena. A lecturer in Arabic at Bar-Ilan U., he is also an expert on Israeli Arabs.

In Case You Missed It:  Biden Admin to Send the Taliban Millions in US Dollars After Arming them with $83 Billion in US Military Weapons
Posted in Israel, Terrorism and tagged Bahrain, Hezbollah, Iran, Islam, Israel, Jihad, Nuclear Proliferation, Nuclear Weapons, Terrorism, United Socialist States of America.

by Maayana Miskin A Jewish civilian patrol will begin Thursday night on Judea and Samaria roads. The patrol began its...