As far as Islamization goes, Europe is ahead of the United States by about a decade. The proportion of Muslims in our country is no more than a fifth of that of the most enriched nations of Western Europe, such as the Netherlands, Britain, and France. And many of the Muslims in this country are “black Muslims” — the Nation of Islam and similar race-based organizations — which constitute a problem in their own right, but not the same as the one posed by the substantial seditious Turkish, Algerian, Moroccan, and Pakistani minorities found in various European countries. 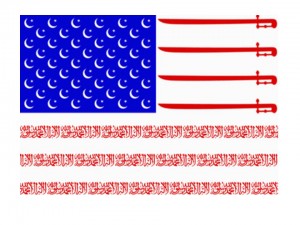 The main difference, however, lies in the manner of Islamization. Europe is heading for sharia from the bottom up — its leaders betrayed their people thirty or forty years ago, allowing in the masses of immigrants who became de facto colonizers via intensive breeding and “family reunification” policies. Demands for Islamic law in Europe are driven by demographic pressure, and some countries are already bowing to what they consider the inevitable. A case in point is the official support in France for métissage, the melding of races, or the fact that Nicolas Sarkozy is willing to get tough on gypsies, but not on Muslims.

In America, on the other hand, Islamization is proceeding from the top down, even though the Muslim population is not large enough to give the Ummah the required clout. CAIR and ISNA routinely claim there are 6-7 million Muslims in the USA, but this is nonsense — it’s propaganda designed to make them outnumber American Jews. The correct figure is more like 1.5 to 2 million.

The Islamic lobby is able to punch well above its weight by buying off large portions of the media and the policy-making elite with petrodollars. With the help of Saudi money, the Muslim Brotherhood has managed to control most of the mosques in the United States and infiltrate the government at all levels. American media outlets — whether as a result of fear, or because of their major Muslim shareholders — are even more dhimmified than the state media in Europe. Sharia finance, Ramadan-sensitive rules, Muslim holidays, halal food — all these things are being imposed by federal, state, and local governments as well as the universities and the major corporations.

The federal government continues to consult with organizations like CAIR, ISNA, MAS, MPAC, and all the other alphabet soup of Islamic advocacy groups, despite the fact that almost all of them are fronts for the Muslim Brotherhood and were named as unindicted co-conspirators in the Holy Land Foundation case. They are officially identified as having links to Hamas and other terror organization, yet their infiltration of our national security establishment is so complete that the government continues to recruit their members as advisors, chaplains, and “diversity trainers”.

In Case You Missed It:  The Center for Public Integrity pays a "journalist" to harass and terrorize family members of vaccine skeptics, all while claiming to protect the "public trust"
Posted in Terrorism and tagged Governments, Immigration, Islam, Muslim Brotherhood, Muslims, United Socialist States of America.

Merkel says violence of Muslim youths is a problem in Germany

Berlin- Chancellor Angela Merkel has weighed in on Germany's fierce immigration debate, acknowledging in an interview released Saturday that fervently...