A report by the International Atomic Energy Agency (IAEA) said Iranian nuclear scientists had made at least 22 kilograms of enriched uranium at least 20 per cent purity, a technical hurdle that is the hardest to overcome on the way to weapons-grade uranium.

Experts estimate that 20 kgs of uranium is the minimum required to arm a warhead. The uranium would still need to have its purity raised to 90 per cent, but that is a relatively easy process. 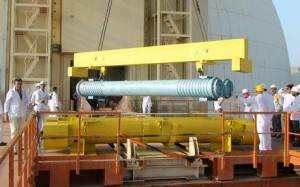 The agency’s report comes in spite of the recent imposition at the United Nations of a fresh round of sanctions against Iran and will heighten fears of an Israeli attack on Iran’s nuclear plants. The prospect of an attack had receded only recently with American assurances that Tehran was more than a year away from acquiring a bomb.

The Vienna-based nuclear watchdog said Tehran had maintained its absolute defiance of international pressure to curb its programme despite the imposition of harsh sanctions in May. The IAEA has grown increasingly alarmed at Iran’s behaviour and the latest report, which will be presented to the agency’s governors at a meeting next week, lambasted Tehran on a series of fronts.

The country’s refusal to answer questions on its attempts to make a nuclear warhead that could be fitted on to its most advanced missiles was denounced as a violation of sanctions.

The agency also rebuked the regime for its repeated failure to co-operate with weapons inspections designed to ensure that material was held securely at Iranian plants.

Iran barred two weapons inspectors from the country in June after they reported undeclared nuclear activity by scientists. It has also systematically objected to other scientists on spurious grounds.

“The agency is … concerned that the repeated objection to the designation of experienced inspectors hampers the inspection process and detracts from the agency’s ability to implement safeguards in Iran,” the report said.

The acquisition of uranium will cause the most alarm however. Until February the Iranians were enriching uranium to levels of no more than 5 per cent at its plant in Natanz.

The government-funded Verification Research, Training and Information Centre, an expert body with privileged access to the IAEA, has estimated that a weapons expert could make a nuclear device from 20 kgs of 20 per cent enriched material with relatively few further obstacles.

The IAEA under Yukiya Amano, its new Japanese director general, has taken a much tougher line with Iran’s obstruction of international inspections. But the agency’s reports demonstrate that while the Iranian economy has suffered from sanctions the nuclear programme has not been impeded. Iran’s stockpile of low-enriched uranium, the feedstock of both civilian and military nuclear programmes, has risen by around 15 per cent since May to reach 2.8 tonnes. However the number of centrifuges that refine uranium to higher levels of purity has fallen to 3,772 from 3,936.

Putin compares himself to FDR as he hints at third term

Vladimir Putin hinted that he would run for a third and possibly even a fourth term as Russian president as...