The stories of Greek unrest that came to a head this past summer shocked the world. There, people had become so dependent upon government programs that when parliament tried to dismantle the welfare state, left-wing terrorist and anarchist groups lashed out. 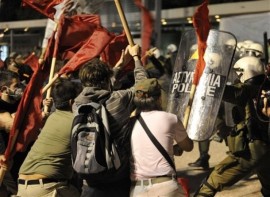 One “radical leftist group” called Revolutionary Struggle is accused of shooting an Athens police officer during riots in 2009, toward the beginning of the Greek financial crisis. This past May, three were killed during protests outside the Greek Parliament when those “whom the police … identified broadly as anarchists,” hurled gas bombs that engulfed a bank.

Such attacks are on the rise throughout Europe. According to Europol, the Hague-based European Police Office, in 2009 left-wing and anarchist terrorist attacks in the European Union increased by 43 percent compared to 2008, and more than doubled since 2007. The report sites Greece as an example of such violence.

As welfare programs increase in the United States and government spending saturates the economy, could such unrest make its way across the pond? The idea isn’t that far fetched, says one European policy analyst. Especially if America continues down its current path.

“I can’t help but think there has to be some connection,” says Sally McNamara, a Brit and a senior policy analyst for European affairs at the Heritage Foundation. Regarding the environment that seems to be contributing to the rise of such groups in Europe, one that could be on its way to the U.S., McNamara adds that it creates “a good excuse for [such groups] to go and do the horrible things that they go and do.”

But environments, she says, are the result of how governments decide to spend their money. It‘s Europe’s spending habits, then, that hold valuable lessons — and possible warnings — for America and the Obama administration.

“For the past 60 years Europe’s been .. told that ‘you can go off and spend tons of money on welfare and someone’s going to pick up the check,’” she says. But when that money runs out, and it will, the cuts that ensue are a shock to a country’s system. That creates unrest because many times people don’t understand why the cuts are necessary, or feel taken advantage of.

So why rise up? Anthony Randazzo, director of economic research at Reason, believes we see violent reactions because such actions are a natural extension of these groups’ philosophy. “The Euro-leftists who have been violent are expressing the ultimate end of progressivism,” he explains, “which is take resources from those who have to distribute to all. When those in power are not doing this, then you must take up with violence to overthrow the government to then have the power to take what you want.”
McNamara adds that such people may also be upset because they’ve been lied to. Especially in Greece, government was not honest with its people about spending or the real economic climate. That honesty is key to sustainability and civil peace: “You’ve got to be honest about what you’re spending, what you’re taking in, and what kind of lifestyle you want to live. You can probably spend a ton of money on health care, or retire at 50, or whatever lunatic scheme that you want, but there has to be a trade off. There is a certain amount of money. You can’t bill the rich to feed the poor all the time.”

According to Randazzo, the pattern is simple: “The state eventually will run out of cash, and then people will riot demanding welfare.”

Unless America learns, or relearns, that lesson, the results could be disastrous. Because when the truth comes out later, rather than sooner, “it’s a lot more painful,” says McNamara.

For now, McNamara feels that Americans can see through spending shams, largely in part because of its people’s desire for information and transparency. She also cites Britain in the 70’s and 80’s to prove there’s nothing inevitable about decline — back then Margaret Thatcher changed the thinking in Britain, and that too can happen in the U.S.

Randazzo agrees that the risk to America now is low. “Societies where there is a stronger sense of ownership, where you have ability to use capital to advance yourself, you are less likely to take to the streets to try and claim what others have from violence,” he says.
Still, even a strong muscle can atrophy after relying on a crutch for too long, says McNamara: “When you look at Europe and if you look at the large welfare spending over a sustained period of time, you can change that [desire for transparency and fiscal restraint]; and it is not for the better.”

That such a thing could happen here is not a radical idea. Dependence and unrest already seem to be taking root in America.

In a New York Times article reporting on the the fire-bomb deaths of those three Greek citizens, anger against “austerity measures” was cited as the reason for unrest. And while such anger is not the only reason for violence, “a growing number of extremists … are seen as using the austerity measures as a pretext to attack the state.”

As one Greek sympathizer put it, “We have a saying here: ‘If you’ve got money, you’re innocent.‘ There’s a feeling that it’s the rich versus the rest, and there‘s unity between those who aren’t rich.”

That same sentiment is present within organizations tied to U.S. labor. On June 21, AFL-CIO president Richard Trumka spoke to the International Trade Union Confederation’s second world congress and railed against the “destructive agenda led by the rich.” An article summing up the speech and the event recalls that, “Delegates also strongly rejected corporate and government voices calling for austerity programs that cut jobs, wages, and social programs for workers in the name of ‘balanced budgets.”” [Emphasis added]

An e-mail requesting comment from Trumka and the AFL-CIO was not returned. 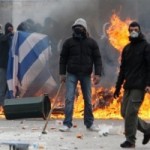 Certainly, those against austerity cuts are not all extremists, and the AFL-CIO is not a terrorist organization. But the point remains that the rhetoric, and the seeds of frustration, are similar. As McNamara points out, “It is very, very hard to roll these programs back once you’ve started them because people either become dependent on them, or they become expectant on them, and also it just changes your national culture.” That dependence, and seepage into the national culture, was apparent in Greece, when the attempted roll back caused violent reactions.

But austerity cuts may be just what’s needed. As Anne Applebaum explains in today’s Washington Post, and as McNamara eluded to earlier, “Austerity is what made Britain great. Austerity is what won the war.” Applebaum devotes a whole column to explaining how the austerity concept saved Britain before, and how a resurgent movement for similar cuts could save it again. Such a movement in the U.S. is lacking, she adds.

Considering America’s spending habits, however, and that a record one in six is enrolled in a government anti-poverty program, austerity cuts may eventually be needed here. Otherwise, the economic crisis that is taking place in European countries such as Greece could manifest itself here. “You can only borrow money for so long,” McNamara points out. And if a culture of anti-austerity takes hold, would a left-wing extremist or anarchist uprising be surprising, then?

“No, not at all. An economic crisis I should imagine is just the favorite of left-wing groups.

In Case You Missed It:  Brace for Unchecked Illegal Immigration Under Biden
Posted in Financial, Freedoms and tagged Depression, Europe, Greece, United Socialist States of America, US Citizen.

Dear friends, May I ask you to be silent for ten seconds? Just be silent and listen. Ten seconds. And...