A cleric of hard-line Muslims has constructed a mosque on a Christian cemetery in Pakistan.

Muslims in Sargodha, Pakistan, were led by a hard-line cleric to construct the mosque at that particular location. It was originally believed the workers were building an addition to the already existing mosque, but the group has been desecrating Christians’ graves. According to the All Pakistan Minorities Alliance (APMA), the government issued an order to halt construction, but building resumed in spite of that. 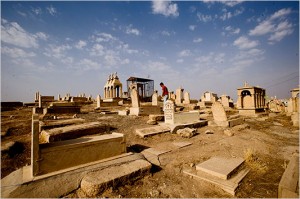 Jonathan Racho of International Christian Concern (ICC) does not deem this news surprising.

“We know that the Islamic faith is very much aggressive, and Islam expanded over a large part of the world through the use of jihad and the use of force, and they have been using this in many countries, including Pakistan,” he points out.

He adds that Muslims use force to expel or otherwise subdue Christians, which can be carried out by placing a mosque on a Christian cemetery. But even if the Christians were able to go to court and prove wrongdoing, Racho explains that “in this particular case, according to Pakistani laws, no religious place could be demolished.”

So the mosque is there to stay. In addition to this desecration, Muslims have threatened to take action if the Christians challenge them. Meanwhile, Pakistan recently suffered extensive flooding, and ICC has learned of cases where Christians were refused aid unless they agreed to convert to Islam.

COULD EUROPE’S LEFT-WING TERRORISM AND ANARCHISM BE HEADED TO AMERICA?

The stories of Greek unrest that came to a head this past summer shocked the world. There, people had become...