At the urging of the FBI, Molly Norris, the Seattle-based illustrator and cartoonist whose satirical drawing marking “Everybody Draw Mohammed Day” resulted in death threats, global protests and impassioned debate about religion and censorship, has been forced to change her name and abandon her former life as a result of her controversial cartoon. 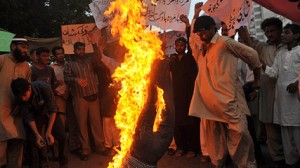 The news that Morris had, out of concerns for her safety, decided to go into hiding was first reported in the Seattle Weekly today, a paper where Norris’ cartoons had regularly appeared:

The gifted artist is alive and well, thankfully. But on the insistence of top security specialists at the FBI, she is, as they put it, “going ghost”: moving, changing her name, and essentially wiping away her identity. She will no longer be publishing cartoons in our paper or in City Arts magazine, where she has been a regular contributor. She is, in effect, being put into a witness-protection program — except, as she notes, without the government picking up the tab.

Norris originally posted her tongue-in-cheek cartoon announcing May 20 as “Everybody Draw Mohammed Day” on her website, which no longer seems to be operating. It was dedicated to the creators of the Comedy Central animated television series “South Park” after one of their episodes was censored for its portrayal of the Islamic prophet.

As expected, Norris’ creation touched a nerve, and her drawing soon became a viral hit on the Internet, posted to a variety of high-profile websites and forwarded in countless e-mails. Soon her fictitious drawing morphed into an actual event as Facebook groups championing the idea popped up and started attracting fans.

With media outlets covering the phenomenon, word of “Everybody Draw Mohammed Day” spread across the globe, and the government of Pakistan announced it was suspending the use of Facebook to residents there.

Norris seemed caught off guard by the whirlwind. She removed the original cartoon from her website, took pains to disassociate herself from an actual “Everybody Draw Muhammad Day” and pleaded for tolerance.

“I did NOT ‘declare’ May 20 to be ‘Everybody Draw Mohammed Day,'” she said on her website.

“I never started a Facebook page; I never set up any place for people to send drawings to and I never received any drawings,” she continued, adding, “I apologize to people of Muslim faith and ask that this ‘day’ be called off.”

In June, despite her renunciation of the event spawned by her cartoon, Norris was placed on a hit list by Yemeni-American terrorist supporting cleric Anwar al-Awlaki, an al-Qaida-linked figure who has been tied to the Fort Hood, Texas, massacre as well as the failed bombing in Times Square, the New York Daily News reported. Shortly thereafter, the FBI contacted Norris.

“We’re hoping the Muslim bigots go into full and immediate remission,” the Seattle Weekly said about Norris’ need to go into hiding, “and we wish her the best.”

In a recent speech, Hamas PLC Speaker Ahmad Bahr, extolling the virtues of martyrdom and Jihad, said that 2.5 million...