First of a three-part series, excerpted from “Mad as Hell: How the Tea Party Movement is Fundamentally Remaking Our Two-Party System”

The Tea Party movement has become one of the most powerful and extraordinary movements in recent American political history. 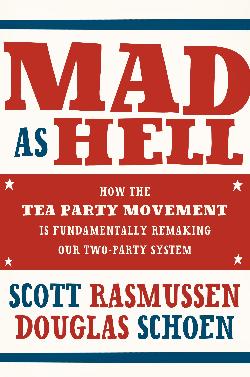 The extraordinary turnout on April 15, 2010, at rallies across the country speaks volumes to the strength, power, and influence of the Tea Party movement, with more than 750 protests held across the country, demonstrating a level of activism and enthusiasm that is both unprecedented and arguably unique in recent American political history.

Survey data collected at about this time bears out the same point. In mid-April 2010, a Rasmussen Reports survey in which nearly one quarter (24 percent) of the electorate self-identified as being members in the Tea Party movement — up from 16 percent a month earlier.

And a mid-April 2010 CNN/Opinion Research Corp. survey showed that 10 percent of Americans say they have actively supported the Tea Party movement: Gone to a rally, contributed money, or taken specific steps to support the movement.

Even a New York Times/CBS News poll showed that close to one in five Americans call themselves supporters of the Tea Party movement.

On April 15, 2009, in honor of Tax Day, seemingly spontaneous tax protests sprung up across the country. At the time, no one in the media or in the political elite thought that these protests were important. In fact, many said they were irrelevant. Some, ignoring the obvious, said they did not exist at all.

In an April 15, 2009, interview, Speaker Nancy Pelosi said, “This initiative is funded by the high end — we call it Astroturf, it’s not really a grass-roots movement. It’s Astroturf by some of the wealthiest people in America to keep the focus on tax cuts for the rich instead of for the great middle class.”

When the elite looked, their first reaction was to say: “Well if it was real (which we really don’t believe it was), it is a one-time occurrence, it is no big deal, and it is worth neither our time nor attention.”

This was evidenced in the findings of an April 2010 study conducted by the Media Research Center, which found that ABC, CBS and NBC aired 61 stories or segments on the anti-spending movement over a 12-month period, and most of that coverage is recent.

“The networks virtually refused to recognize the tea party in 2009 (19 stories), with the level of coverage increasing only after Scott Brown’s election in Massachusetts” in January, the report said, referring to the Republican’s win of the Senate seat long held by Edward M. Kennedy.

The first reaction from political and media elites was that these were insignificant gatherings, just small numbers of people inflated by the media.

“It can be expected from the margins, but it’s troubling to see it [The Tea Party movement] embraced and validated by more mainstream entities,” said writer Stuart Whatley in a post on the Huffington Post, April 14, 2009.

Next, they said that these protests were by no means spontaneous, that the Tea Party movement was not a legitimate grass-roots movement. Rather, it was being fed and fueled by conservative talk radio and cable television.

“Our number two story tonight, the sad reality behind the corporate sponsored Tea Parties, visual proof that this is not about spending, deficits, or taxes, but about some Americans getting riled up by the people who caused these things, and finally about some Americans who just hate the president of the United States. According to both the conservative organs, the New York Post and The Washington Times, see there was another double entendre coming, the protests only drew tens of thousands nationwide, despite relentless 24-7 promotion on Fox News, including live telecasts from several locations,” said Keith Olbermann, MSNBC host.

Part II: The evolution of the Tea Party movement
There were two mass gatherings of people in 2009. The first was expected and universally applauded; the second was unrecognized, misunderstood, and not even fully documented.

In Case You Missed It:  Meet the BRANCH COVIDIANS: An apocalyptic medical-extremist group of tyrants whose avid followers participate in genocide by vaccination
Posted in Freedoms and tagged Conservatism, United Socialist States of America.

A Democratic lawmaker signed onto a Republican petition to repeal healthcare reform. Rep. Gene Taylor (D-Miss.) signed onto a discharge...