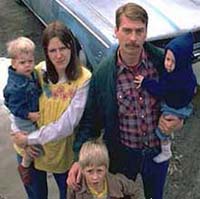 “The number of people in poverty in 2009 is the largest number in the 51 years for which poverty estimates have been published,” the Census Bureau said.

The statistics cover President Obama’s first year in office, when unemployment climbed to 10 percent in the months after the financial meltdown.

The agency also reported that the number of people without health insurance coverage rose to 50.7 million in 2009, while the percentage increased to 16.7 percent. The increase was due mostly to the loss of employer-provided health insurance during the recession. Congress passed a health overhaul earlier this year to extend coverage to more people.

‘It’s hell. I can’t stand it!’ What Michelle Obama REALLY thinks of being First Lady