The most striking line in President Obama’s address to the UN General Assembly was his quip about “a future where Iraq is governed by neither tyrant nor foreign power”. That foreign power of course is the United States, which along with Great Britain, Australia and other key allies liberated over 30 million people from the brutal boot of Saddam Hussein. Here’s the quote in context: 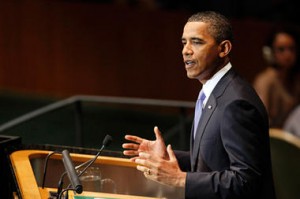 So even as we have come through a difficult decade, I stand here before you confident in the future — a future where Iraq is governed by neither tyrant nor a foreign power, and Afghanistan is freed from the turmoil of war; a future where the children of Israel and Palestine can build the peace that was not possible for their parents; a world where the promise of development reaches into the prisons of poverty and disease; a future where the cloud of recession gives way to the light of renewal and the dream of opportunity is available to all.

To compare a Baathist dictatorship with the most powerful democracy in the world is an astonishing gaffe for a US president to make in a speech, not least one watched by tens of millions of people across the world. It is like a post-war US president drawing an analogy between Nazi rule and the Allied occupation of post-war Germany.

This should have been a powerful moment to honor and pay tribute to the huge sacrifice made by over 4,000 American servicemen and women who laid down their lives in Iraq, but the president simply could not bring himself to do it.

The speech was also an opportunity to rally the world to do more to confront and defeat the Islamist enemy in Afghanistan but he chose not to take it. President Obama barely referenced the fact that there are over 100,000 American troops battling the Taliban along with key NATO allies. In addition, he delivered what can only be described as a remarkably weak-kneed response in the face of the Iranian nuclear threat, opening the door to continuing engagement with a genocidal regime that threatens to wipe an entire country off the map.

The Iraq gaffe this morning is symbolic of Obama’s wider failure as a president, and why his standing continues to decline domestically. He is a leader who increasingly appears to have little empathy with the American people, deeply out of touch with public opinion, and seemingly more concerned with his international image than advancing the interests of his own country.

In Case You Missed It:  Senator Rand Paul: Dr. Fauci Must Answer Questions on Why He Continued to Fund Dangerous Human-Virus Studies after they were Banned in US (VIDEO)
Posted in Tyranny and tagged Obama, United Nations, United Socialist States of America.

California has the eighth-largest economy in the world yet is on the verge of bankruptcy. There are a few simple...