LONDON – European security officials said Wednesday an Islamic terror plot to wage Mumbai-style shooting sprees in Britain, France and Germany is still active and that sites in Pakistan — where the threat was intercepted two weeks ago — are being scoured for Muslim al-Qaida operatives. 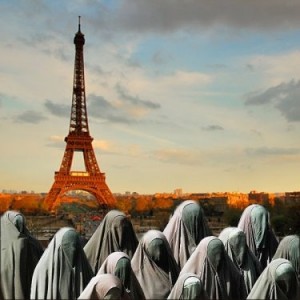 British Muslims training with al-Qaeda were planning an armed rampage through London as part of a terrorist spectacular aimed at European capitals..

The plot was still in its early stages and not considered serious enough to raise the current terror threat level, officials said. Still, the Eiffel Tower in Paris was briefly evacuated Tuesday, the second time in the past week because of an unspecified threat, and police were on alert in Britain and France.

“This plot was in its embryonic stages,” a British government official who spoke on condition of anonymity because of the sensitivity of his work told The Associated Press on Wednesday. “This one has preoccupied us more than others in the past few weeks — and it is still active — but it has not raised enough alarms to change our security threat level.”

The announcement of the Islamic plot came ahead of Thursday’s anniversary of the Prophet Muhammad cartoons being published in a Danish newspaper. The plot was foiled after Western intelligence agencies, including MI6 and GCHQ, uncovered the plans by senior al-Qaeda operatives in the lawless tribal areas.

It also came as Spanish authorities announced they had arrested a U.S. citizen of Algerian origin on suspicion of financing al-Qaida’s North African affiliate.

Mohamed Omar Debhi, 43, was arrested Tuesday, although Spain’s Interior Ministry said that was not connected to the terror threat. He is suspected of laundering money and sending some of it to an associate in Algeria, Toufik Mizi, to be passed on to cells of al-Qaida in the Islamic Maghreb.

Europe has been a target of numerous Islamic terror plots — the deadliest being the Madrid train bombings in 2004 when 10 shrapnel-filled bombs exploded during rush hour, killing 191 people and wounding about 1,800.

In 2006, U.S. and British intelligence officials thwarted one of the largest plots yet and one that changed air travel forever — a plan to explode nearly a dozen trans-Atlantic airliners.

Officials gave no other details of the recent terror plot except to say that it originated in Pakistan with a group “threatening to wage a Mumbai-style attack” on cities in Britain, France and Germany. It was not clear how the attacks would be carried out or when.

A three-day siege in 2008 by Muslim gunmen in the Indian city of Mumbai left 166 people dead and raised fears of similar low-budget types of attacks around the world — a departure from the Sept. 11 terror attacks in the United States that brought down the Twin Towers in 2001.

The recent terror threat has prompted a surge of attacks by unmanned U.S. drones in Pakistan, a Western counterterrorism official said.

The official said the targeted strikes were aimed at al-Qaida and other militant groups arrayed in Pakistan’s tribal region near the Afghanistan border. The official spoke on condition of anonymity because the details of the terror plot remain sensitive.

Another British government official, however, said that while the drone strikes are thought to have disrupted the planning of the attacks the operation was still considered active.

The Obama administration has intensified the use of drone-fired missiles in Pakistan’s border area, but this month there have been at least 21 attacks — more than double the highest number fired in any other single month.

A Pakistani government official, who also spoke on condition of anonymity Wednesday, said Pakistani officials had stepped up the search for suspected militants in the past two weeks.

“We are actively working with the Americans and British to stamp out these militants,” he told the AP.

A suspected American missile strike killed four militants in northwest Pakistan on Tuesday, intelligence officials said. There was no word on the identities of those killed in the attack in the South Waziristan region, just across the border from Afghanistan. The Pakistani army last year launched a major anti-militant offensive in the region, though insurgents remain.

The counterterrorism official, who is familiar with the drone strikes and the details of the Europe terror plots, said Tuesday that the missile strikes in Pakistan are “a product of precise intelligence and precise weapons. We’ve been hitting targets that pose a threat to our troops in Afghanistan and terrorists plotting attacks in South Asia and beyond.”

The official acknowledged that “our operational tempo has been up for a while now,” and added that “given the stakes involved, we hope to keep the pressure on as long as we can

Netanyahu’s Nemesis Rahm Emanuel On Way Out of White House

by Tzvi Ben Gedalyahu U.S. President Barack Obama soon may hang the “help wanted” sign outside the door of his...