Britain has received its first autumn snowfalls for the year as a surprise cold snap sent millions reaching for the central heating controls this weekend. 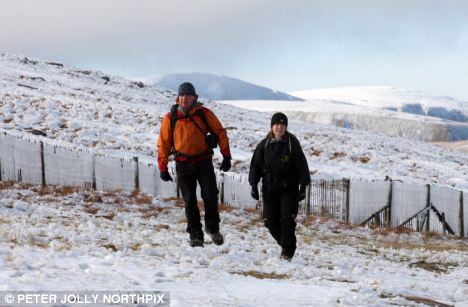 Summer made a particularly swift exit from the Highlands as the first sprinklings of snow paid an early visit to the north of Scotland.

The last time Britain saw a September cold snap as severe as this current one was in 2003, when much of northern England was below freezing.

For the people of the Cairngorms particularly, it was a wintry end to September.

Snow fell on the Scottish mountain range overnight, and hill-walkers had to wear their winter woolies and specialist equipment as they enjoyed blue, sun-filled skies with slippery conditions underfoot.

As usual it was the children who took best advantage with some of the earliest snowmen ever built on the Cairngorms.

However, there was insufficient snow for skiers to make an appearance, but staff at the resort were hoping for another bumper year on the slopes with advance winter sports bookings booming.

But there was a warning for hill-users, not against frostbite, but that there was a high risk of sunburn due to the cloudless atmosphere.

Although the nights are getting colder, Britain still has a way to go to beat the record low September temperature of minus 6.7c (20f) in Dalwhinnie in the Highlands in September 1942.

California is back under the spotlight. California representatives are saying they have only enough money in the budget to pay...