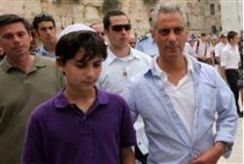 Emanuel and son Zach on visit to Israel

U.S. President Barack Obama soon may hang the “help wanted” sign outside the door of his Chief of Staff, Rahm Emanuel, who reportedly will step down. Emanuel once was allegedly called a “self-hating Jew” by Prime Minister Binyamin Netanyahu, who denied the report.

Sources said that Emanuel, whose father was an underground fighter against the British Mandate before Israel was re-established as a country in 1948, has arguably landed President Obama in hot water for pushing policies that squeezed the Israeli coalition led by Prime Minister Binyamin Netanyahu.

Emanuel is expected to announce on Friday whether he will run for mayor of Chicago, in President Obama’s home state. Regardless of his decision, reports have been floating for months that he has caused problems for the president, particularly among Jewish donors.

“To say I don’t sleep easily with the current administration’s relationship to Israel would be an understatement,” billionaire Israeli native and Obama supporter Chaim Saban said earlier this year. He added that when he expressed his views to the White House, Emanuel said his own views were more hawkish than 50 percent of Israelis. The figure is highly doubtful considering the makeup of Israel’s Knesset and poll results, and reflects the insularity of President Obama’s appointments.

Politco.com reported that President Obama is likely to replace him with one of his “insiders’ rather than take the risk of making a radical change in his staff. If Emanuel quits, a replacement probably will not be named until after the mid-term Congressional elections in November. Polls so far point to a likely vote revolt against President Obama’s Democratic party.

Another “help wanted” sign may be hung out to replace White House senior advisor David Axelrod, another Jew in President Obama’s “inner circle.” He said this week that he probably will leave office in several months, as previously planned.

A third departure may include General (ret.) James Jones, the U.S. national security advisor. Both Jones and Emanuel are far from being friends of the Netanyahu government. The IDF privately was critical of him when he served as the Middle East military envoy in Judea and Samaria.

Emanuel was quoted later as saying he that he wanted to see similar diplomatic maneuvers. He is widely viewed as having steered President Obama towards stiff opposition to a Jewish presence in areas of Jerusalem claimed by the Palestinian Authority as well as all of Judea and Samaria.

Emanuel’s frequent use of rude language vaulted him into the headlines at the same time he had intensified the powers of Chief of Staff, acting as a liaison with Congress as well as trying to stifle criticism of his boss.

With domestic issues dominating the concerns of America voters, Emanuel’s successor, whoever he is, is expected to be less active in Middle East affairs.

In Case You Missed It:  “We Really Did Have a Terrific Vote Tonight”- Trump-Hater Liz Cheney Gloats after GOP Lawmakers Vote 145-61 to Keep Her in Leadership Role (VIDEO)
Posted in Israel, Tyranny and tagged Israel, Judea and Samaria, Netanyahu, Obama, White House.

Israeli Prime Minister Benjamin Netanyahu has offered to extend a freeze on settlement construction in the West Bank--a key sticking...