A coalition of Mexican mayors has asked the United States to stop deporting illegal immigrants who have been convicted of serious crimes in the U.S. to Mexican border cities, saying the deportations are contributing to Mexican border violence.

The request was made at a recent San Diego conference in which the mayors of four Mexican border cities and one U.S. mayor, San Diego Mayor Jerry Sanders, gathered to discuss cross-border issues. 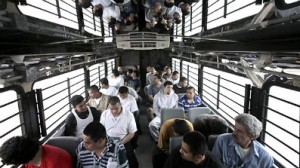 Ciudad Juarez Mayor Jose Reyes blamed U.S. deportation policy for contributing to his city’s violence, saying that of the 80,000 people deported to Juarez in the past three years, 28,000 had U.S. criminal records — including 7,000 convicted rapists and 2,000 convicted murderers.

Those criminal deportees, he said, have contributed to the violence in Juarez, which has reported more than 2,200 murders this year. Reyes and the other Mexican mayors said that when the U.S. deports criminals back to Mexico, it should fly them to their hometowns, not just bus them to the border.

But critics in America say the Mexican lawmakers are simply trying to pass the buck to the U.S. and its taxpayers. They say the Mexicans should take responsibility for their criminals, who are putting both Mexican and American lives in danger.

U.S. Immigration and Customs Enforcement transports a majority of Mexican criminal aliens back to Mexico on buses. Since they’re often held in U.S. detention centers near the border prior to deportation, busing them to Mexican border cities is much less expensive than flying them to the interior of the country.

Those convicted of crimes in the U.S. are required first to fulfill “any sentence imposed by the U.S. courts,” ICE spokeswoman Virginia Kice told FoxNews.com.

She said all of the deportees are then inspected by Mexican immigration authorities when they arrive in Mexico, and if they are wanted for crimes in Mexico, they are also met by representatives from the Mexican Attorney General’s Office.

But if they don’t have charges pending against them in Mexico, they are free men and women once they cross the border regardless of what they have done in the U.S.

Despite that, ICE says it recognizes the threat posed by Mexico’s cartel-related crime and has been working closely with Mexican authorities to address it.

“Earlier this year, ICE suspended the removal of Mexican nationals with criminal records to Ciudad Juarez,” Kice said. “…In addition to dedicating unprecedented manpower, technology and infrastructure resources to the border, ICE has also collaborated with Mexico to adapt its removal procedures in response to safety considerations.”

And while criminal aliens continue to be repatriated to Mexico at other locations along the border, Kice said, “those removals are coordinated closely with Mexican authorities and advance notification is provided prior to the return of convicted violent offenders.”

Juan Hernandez, founder of the Center for U.S.-Mexico Studies at the University of Texas at Dallas and former director of Mexico’s Presidential Office for Mexicans, says he’s spoken to the border city mayors, and they don’t believe the U.S. is doing enough.

Critics of the Mexican lawmakers say the U.S. is prosecuting the criminals in question, and if Mexico wants to keep them out of its border towns, then it should be up to Mexico to lock them up or transport them elsewhere.

But Hernandez, a dual citizen of both the U.S. and Mexico, says the U.S. can’t wash its hands of this issue.

“The border will never totally be shut down because we don’t want that to happen in the United States. Mexico is our second most important trading partner, there are close to one million people crossing legally every day between Mexico and the United States,” Hernandez told FoxNews.com. “So we can be strict to the letter of the law and say these criminals are Mexico’s problem, but it’s not just their problem because it will come back to haunt the United States.”

Melhman says in some cases it may be worth spending the extra time and money to fly criminals to the Mexican interior to lower the risk of them coming back over the border. But that decision, he says, needs to be made because it’s deemed to be in the best interest of the U.S., not because of pressure from Mexico.

“Every day, American citizens are victimized by illegal alien criminals because, for political reasons, our government refuses to enforce immigration laws,” he said. “…We need to put resources into protecting our own interests and making sure violence doesn’t spread across our border.”

Asked whether ICE planned to make any changes to its deportation policy since the conference, Kice simply said, “While ICE has suspended criminal alien removals to Cuidad Juarez, criminal aliens continue to be repatriated to Mexico at other locations along the border and to the interior of the country.”

In Case You Missed It:  US economy will get MONKEYHAMMERED by insane policies like free universal rent, now announced in California
Posted in Freedoms and tagged Illegal Immigration, Mexico.

Britain has received its first autumn snowfalls for the year as a surprise cold snap sent millions reaching for the...