California is in serious trouble because many people refuse to admit to one of there big problems – the flight of businesses, capital and jobs to other states and nations. 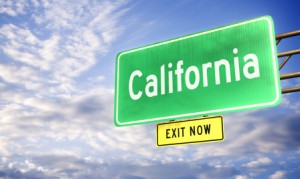 Good information about the phenomena is hard to come by. Hence, out of frustration, a year ago we began compiling a list of what we call “California Disinvestment Events.”

The new compilation shows that 144 companies have fully or partially engaged in such events during the first three quarters of 2010, nearly triple the 51 companies discovered for all last year. You can see the list of companies that disinvest along with explanatory context here.

Such events are found in public documents. The real exodus is incalculable because so many are carried out without public notice. I think that for every one that becomes public knowledge, another dozen or more occur. Of course, many are small companies, but as they grow the economic benefits will be reaped elsewhere.

The top states gaining our businesses since January 2009 show Texas in the top spot, followed by Arizona, Colorado, Nevada, Virginia and Utah. Also, companies have moved functions to Taiwan, Mexico, Brazil and Chile. The jobs include R&D, which used to be a California hallmark. Now we’re seeing unusual losses. Last week, HomeEq Servicing said it’s closing its Sacramento headquarters and moving some jobs to Uruguay. Having employees in Uruguay reinforces just how “portable” jobs have become.

Businesses are shrinking their California footprint because high taxes and intense regulation damage their ability to compete. Even Boeing conceded as much when moving hundreds of jobs from Long Beach to Oklahoma City, saying it must become a “more affordable” federal contractor.

On the “California Disinvestment Events” list are companies relocating headquarters to another state, moving facilities overseas, or targeting locations elsewhere to expand, thereby financing out-of-state and out-of-country growth worth billions of dollars. The list is conservative because it excludes many companies and many categories such as bankruptcies and retail stores.

Last week I met a “denier” regarding this issue, which turns out to be a great “case study.” A journalist interviewing me resisted the idea that Northrup Grumman moved its Los Angeles headquarters to Virginia because of tax and regulatory burdens.

“Oh no,” he suggested. “They moved to be near their customer, the Pentagon, and the business environment here had little to do with it.”

Hardly. California’s business-bashing had plenty to do with it, to wit:

· Predecessor company Northrop Corp. had been a California institution since 1939. Why did its leadership feel compelled in 2010 to live near the Pentagon when that was unnecessary for the prior 70 years?

· I used to be Grumman Corp.’s Washington, D.C. public affairs director, part of a 40-person staff. I suspect the Northrop Grumman presence is larger now. Did dozens of expert Washingtonians lose their competence and now need the top officers around every day? Nope. Not convinced.

· Certainly executives across the country aren’t lying about their criticisms, which caused CEO Magazine to declare California the worst state in which to do business.

· How about public comments by California companies? McAfee revealed in March that it avoids hiring here and saves about 30 to 40% each time it hires outside of the state. (Certainly a similar figure would apply to Northrop Grumman.) Intel boldly says it won’t put a new facility anywhere in California. Mercury Paper Moved to Virginia and cited “low operating costs”? Pipeline Software is leaving for Nevada because taxes represented a major hurdle. How many comments like that do I have to provide to that reporter?

· California companies have relocated high-tech jobs, demonstrating that one of our greatest assets – brainpower – doesn’t count for as much as it used to.

· Why would Hilton Hotels move its headquarters out of Beverly Hills and VeriSign do likewise out of Mountain View, with both relocating near the Pentagon in Virginia when neither are defense contractors?

· Costly proposals are red flags. Site selection firms know that California’s Workers’ Comp may jump by 29.6 percent next year and have already warned their clients. (An “incoming” company may have reversed course for another state, and we’ll never know it.)

If all of the above isn’t convincing, check out “The Top Ten Reasons Why California Companies Are Calling the Moving Companies” here.

We suffer long-term when companies move out. Lockheed left for Bethesda, Md., in 1995 when after a merger it became Lockheed Martin. The corporation reported an operating profit of $5.2 billion last year. If it had stayed, how much would California’s treasury have benefited from their corporate and personal income taxes over those many years?

Sadly, the situation will worsen with legislators willing to hike business and personal taxes and with regulators planning to impose more fees and fines.

Today, when a company calls me about a California-related move, it’s always to move out. It’s time for us to be honest with each other about the hostility we direct towards businesses and find ways to reverse it. Until then, outbound moving vans will continue to do a brisk business.

In Case You Missed It:  Carlsbad, CA Says No More to Lockdowns. May It Be A National Model
Posted in Financial and tagged California, Depression.

A coalition of Mexican mayors has asked the United States to stop deporting illegal immigrants who have been convicted of...