To the Members of the California State Senate:

This bill changes the crime of possession of less than an ounce of marijuana from a misdemeanor punishable only by a $100 fine to an infraction punishable by a $100 fine. Under existing law, jail time cannot be imposed, probation cannot be ordered, nor can the base fine exceed $100 for someone convicted of this crime.

I am opposed to decriminalizing the possession and recreational use of marijuana and oppose Proposition 19, which is on the November ballot. 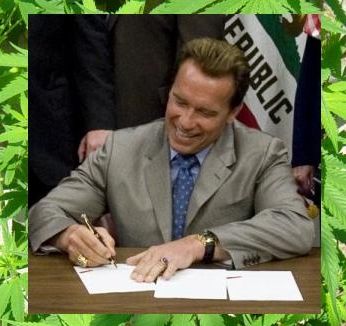 Unfortunately, Proposition 19 is a deeply flawed measure that, if passed, will adversely impact California’s businesses without bringing in the tax revenues to the state promised by its proponents.

Notwithstanding my opposition to Proposition 19, however, I am signing this measure because possession of less than an ounce of marijuana is an infraction in everything but name. The only difference is that because it is a misdemeanor, a criminal defendant is entitled to a jury trial and a defense attorney.

In this time of drastic budget cuts, prosecutors, defense attorneys, law enforcement, and the courts cannot afford to expend limited resources prosecuting a crime that carries the same punishment as a traffic ticket.

As noted by the Judicial Council in its support of this measure, the appointment of counsel and the availability of a jury trial should be reserved for defendants who are facing loss of life, liberty, or property greater than $100.

For these reasons, I am signing this bill.

In Case You Missed It:  “Cobalt Magnet” is the codename for dirty bomb drills in Austin, TX – new intel on radicalized terrorists who will combine cobalt-60 with explosive suicide vests
Posted in Freedoms and tagged California, Crime.

Another malfunction shuts down the No. 3 reactor at the Kola Nuclear Power Plant for the third time in three months

MURMANSK – The No. 3 reactor block of the embattled Kola Nuclear Power Plant was shut down today by its...