Let’s get this straight. Nicky Diaz-Santillan, Meg Whitman’s now infamous housekeeper, supplied a false Social Security card, a forged license, and, when asked on an 11-page job application if she was eligible to work in the United States, checked a box indicating “yes.” Yet, according to her attorney Gloria Allred, she is the innocent victim?

Yesterday, Ms. Allred excoriated Meg Whitman for supposedly hiring Ms. Diaz-Santillan and then firing her only when she decided to run for Governor. Nice try from the “Rouge Rabble-Rouser”. Unfortunately for her client, that isn’t exactly the truth (it isn’t unfortunate for Ms. Allred, as she already got what she wanted: more fame). By all accounts, Ms. Whitman appropriately fired her housekeeper when she admitted that she was in the country illegally with no standing to accept employment.

Ironically, Gloria Allred has made the case for American citizens of means to never hire anyone with a Hispanic accent. Ms. Allred has put forth that even if presented with what looks like real and valid documents, those folks from Mexico or Central America are simply not to be trusted. If Whitman is the actual antagonist here, then all citizens that do business with Hispanics should reconsider that relationship. Think about it. Those documents might not be real. How can you be sure? Do you really want someone like Gloria Allred coming after you because you dared to believe in a Hispanic and then fired them after nine years? Those Hispanics steal identities don’t ya know?

Obviously, I’m taking this to a level approaching satire with the above and immigration in the United States is a very complex issue. However, every news story has an unwritten tag line. It is usually the part of a story the press ignores, for if they focused on it, it would change the dynamic of the story so much, it would risk killing the original storyline. If we were to focus on the crimes committed by Ms. Diaz-Santillan (forgery, using false documents, etc.) the story’s antagonist would likely switch. Meg Whitman did fire Ms. Diaz-Santillan as soon as she admitted she was in the country illegally. Meg followed the rules. It was Ms. Diaz-Santillan that duped Meg Whitman and committed unlawful acts. Besides, an undocumented worker lying to gain employment is too typical. A rich white woman abusing Mexicans? Now that’s got legs!

Gloria Allred will allegedly supply documents this afternoon that indicates that her own client is a criminal. She states that she will reveal a letter from the Social Security Administration sent to Ms. Whitman indicating a mismatch between Ms. Diaz-Santillan name and the Social Security number she provided to Ms. Whitman. She will then scream, “Meg Whitman is a criminal for not reporting and firing my criminal client earlier than when she did.”

Only in America can someone who made $23 an hour for nine years, while forging documents in the first place to get the job, be the victim. The gall of Meg Whitman. Did she even have the decency to offer Ms. Diaz-Santillan Ebay options?

Questions that remain, who’s social security number did Nicky, the maid use/steal? Why is she not being charged for identity theft, and why is Nicky not ready to be deported? 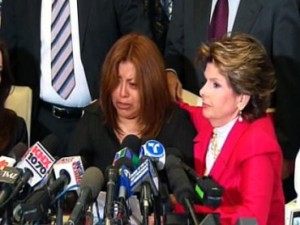 Allred is a known Democrat fundraiser and party activist.

This smells like raw politics to me. Let’s see what happens next.

In Case You Missed It:  Bidenomics: US To Totally Collapse after Dollar Collapses
Posted in Financial and tagged Crime, Democrats, Illegal Immigration.

WASHINGTON (AFP) - The US State Department will soon issue a new travel warning to Americans in Europe after intelligence...