If you strip away the political correctness, Chapter Three of the IMF’s World Economic Outlook more or less condemns Southern Europe to death by slow suffocation and leaves little doubt that fiscal tightening will trap North Europe, Britain and America in slump for a long time. 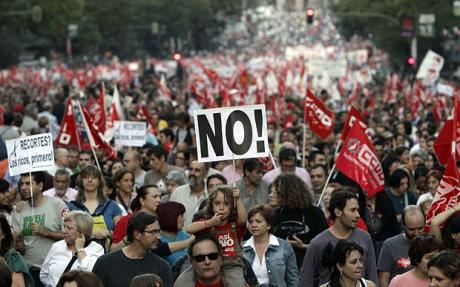 The IMF report – “Will It Hurt? Macroeconomic Effects of Fiscal Consolidation” – implicitly argues that austerity will do more damage than so far admitted.

Normally, tightening of 1pc of GDP in one country leads to a 0.5pc loss of growth after two years. It is another story when half the globe is in trouble and tightening in lockstep. Lost growth would be double if interest rates are already zero, and if everybody cuts spending at once.

“Not all countries can reduce the value of their currency and increase net exports at the same time,” it said. Nobel economist Joe Stiglitz goes further, warning that damn may break altogether in parts of Europe, setting off a “death spiral”.

“A fall in the value of the currency plays a key role in softening the impact. The result is consistent with standard Mundell-Fleming theory that fiscal multipliers are larger in economies with fixed exchange rate regimes.” Exactly.

Let us avoid the crude claim that spending cuts in a slump are wicked or self-defeating. Britain did exactly that after leaving the Gold Standard in 1931, and the ERM in 1992, both times with success. A liberated Bank of England was able to cut interest rates. Sterling fell. The key point is whether you can offset the budget cuts.

But by the same token, it is fallacious to cite the austerity cures of Canada, and Scandinavia in the 1990s – as the European Central Bank does – as evidence that budget cuts pave the way for recovery. These countries were able export to a booming world. They could lower interest rates, and were small enough to carry out `beggar-thy-neighbour’ devaluations without attracting much notice. We were not then in our New World Order of “currency wars”.

Be that as it may, it is clear that Southern Europe will not recover for a long time. Portuguese premier Jose Socrates has just unveiled his latest austerity package. He has capitulated on wage cuts. There will be a rise in VAT from 21pc to 23pc, and a freeze in pensions and projects. The trade unions have called a general strike for next month.

Mr Socrates has already lost his socialist majority, leaking part of his base to the hard-Left Bloco. He must rely on conservative acquiescence – not yet forthcoming. Citigroup said the fiscal squeeze will be 3pc of GDP next year. So under the IMF’s schema, this implies a 3pc loss in growth. Since there wasn’t any growth to speak off, this means contraction.

Spain had a general strike last week. Elena Salgado, the defiant finance minister, refused to blink. “Economic policy will be maintained,” she said. There will be another bitter budget in 2011, cutting ministry spending by 16pc.

Mrs Salgado has ruled out any risk of a double-dip. But the Bank of Spain fears the economy may contract in the third quarter.

The lesson of the 1930s is that politics can turn ugly as slumps drag into a third year, and voters lose faith in the promised recovery. Unemployment is already 20pc in Spain. If Mrs Salgado is wrong, Spanish society will face a stress test.

We are seeing a pattern – first in Ireland, now in Greece and Portugal – where cuts are failing to close the deficit as fast as hoped. Austerity itself is eroding tax revenues. Countries are chasing their own tail.

The rest of EMU is not going to help. France and Italy are cutting 1.6pc GDP next year. The German squeeze starts in earnest in 2011.

Given the risks, you would expect the ECB to stand by with monetary stimulus. But no, while the central banks of the US, the UK, and Japan are worried enough to mull a fresh blast of money, Frankfurt is talking up its exit strategy. It risks repeating the error of July 2008 when it raised rates in the teeth of the crisis.

The ECB is winding down its lending facilities for eurozone banks, regardless of the danger for Spanish, Portuguese, Irish, and Greek banks that have borrowed €362bn, or the danger for their governments. These banks have used the money to buy state bonds, playing the internal “carry trade” for extra yield. In other words, the ECB is chipping at the prop that holds up Southern Europe.

One has to conclude that the ECB is washing its hands of the PIGS, dumping the problem onto the fiscal authorities through the EU’s €440bn rescue fund. That is courting fate.

Who believes that the EMU Alpinistas roped together on the North Face of the Eiger are strong enough to hold the rope if one after another loses its freezing grip on the ice?

In Case You Missed It:  Capital Gains Tax Increase is Bad. Here's Why
Posted in Financial and tagged Debt Crisis, Deficit, Depression, Europe.

A mobile phone application costing less than £2 which tracks the precise location of passenger aircraft in the sky is...