WASHINGTON — Republican Senate nominee Christine O’Donnell of Delaware said in a 2006 debate that China was plotting to take over America and claimed to have classified information about the country that she couldn’t divulge.

O’Donnell’s comments came as she and two other Republican candidates debated U.S. policy on China during Delaware’s 2006 Senate primary, which O’Donnell ultimately lost. 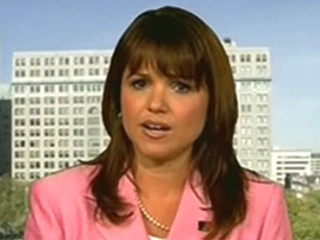 She said China had a “carefully thought out and strategic plan to take over America” and accused one opponent of appeasement for suggesting that the two countries were economically dependent and should find a way to be allies.

“That doesn’t work,” she said. “There’s much I want to say. I wish I wasn’t privy to some of the classified information that I am privy to.”

“A country that forces women to have abortions and mandates that you can only have one child and will not allow you the freedom to read the Bible, you think they can be our friend?” she asked. “We have to look at our history and realize that if they pretend to be our friend it’s because they’ve got something up their sleeve.”

At the debate, opponent Jan Ting countered that China has the potential to become a more Democratic country and an important ally.

“I think our China policy has to be handled very carefully,” Ting said. “We have the capability of making an enemy or a friend out of China.”

When Ting challenged O’Donnell’s claim about having secret information, O’Donnell didn’t answer specifically but suggested she had received it through nonprofit groups she worked with that frequently sent missionaries there.

O’Donnell was a little-known candidate until she stunned Rep. Mike Castle to win the Republican nomination last month in her third bid for the Senate. The tea party-backed hopeful faces Democrat Chris Coons in the November general election.

In Case You Missed It:  University of Pittsburgh caught harvesting LIVE baby body parts prior to abortions; organ harvesting experiments funded by Fauci and the NIH
Posted in Freedoms and tagged Campaign, China, Republicans, United Socialist States of America.

Coding of Virus Attacking Iran May Refer to Queen Esther

by Maayana Miskin Iranian Intelligence Minister Heider Moslehi said Sunday that his country is under cyber attack, and blamed the...