Shocking British short to promote cutting carbon emissions shows skeptics being blown up for not participating.

Red is the new green, according to a horrific short film put together by global warming alarmists in Britain for 10:10 a “Global Day of Doing.” Blood red that is. 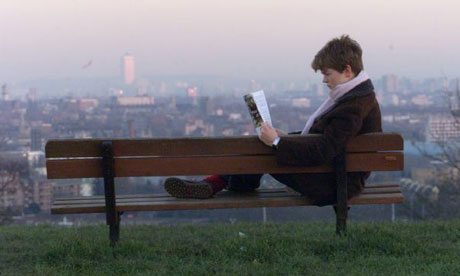 The group 10:10 UK’s “No Pressure” video advertisement that was intended to promote its cause begins with a teacher lecturing her students: “Just before you go there’s a brilliant idea in the air that I’d like to run by you. Now it’s called 10:10 – the idea is that everyone starts cutting their carbon emissions by 10 percent, thus keeping the planet safe for everyone, eventually.”

Preaching global warming alarmism to children is nothing shocking, but the next part of the film was. The teacher singles out the two students who are skeptical about participating, presses a red button and BLAM! those children’s bodies explode as blood and guts cover their classmates.

Skeptical soccer players, businesspeople and even actress Gillian Anderson all get blown up in the “disturbing” video for not complying with the wishes of the global warming crowd.

The violent depiction may be a new low for the environmental movement, but its violent rhetoric has been in use for years. Yet, the response from the liberal news media in the U.S. has been minimal, despite the willingness of the same outlets to portray – without a shred of evidence – conservatives as “incendiary” and violent.

Despite the horrific nature of the video and the message that skeptics should be killed, the television news media, with the exception of Fox News, haven’t reported on it as of October 5.

The New York Times has run a couple of articles on its website, and James Taranto of The Wall Street Journal wrote a strong condemnation October 5 of the “green supremacists” that created the video. But, so far at least, much of the national news media have ignored the controversy.

The video was outrageous enough to upset even climate-change extremist Bill McKibben, who called it “the kind of stupidity that hurts our side.” Taranto said that the video had “drawn lots of criticism, much of which to our mind is not strong enough.” Perhaps he had the Time magazine’s blog headline in mind which callously read: “Blowing Up British Kids: Not Everyone’s Cup of Tea.”

But compare the minimal, isolated journalistic condemnation of such a violent and shocking film, to the volume of news stories portraying tea partiers and conservatives violent, without any proof whatsoever. On March 25, NBC’s Ann Curry harangued Sen. John McCain, R-Ariz., about Republicans “encouraging the violence” against Democrats.

Curry specifically cited a map from former Alaskan Gov. Sarah Palin’s website that had shown weak Democratic districts in crosshairs. She pressed McCain saying “Do you know, recommend that your party use less incendiary language?”

McCain replied that terms like “targeted” and “battleground” are part of the “political lexicon.” Such terms have been long used by both parties and by the news media without concern of actual violence, yet Curry declared “These are very dangerous times.”

A few days after that “Today” interview, CNN condemned Palin with an onscreen caption that read: “INCITING VIOLENCE?” as Palin was showing speaking in Nevada.

Anchor Don Lemon said on March 28, “Sarah Palin takes on one of the highest ranking Democrats right in his own backyard, all while causing another uproar by urging tea parties to quote ‘reload.’ And the question is, are comments like that inciting violence and name-calling over the health care bill and the like?” The panelists that answered that question agreed that Obama’s political opponents were inciting violence and were motivated by racism.

But Washington Post columnist Richard Cohen took the criticism of conservatives to an absurd level on October 5 by arguing that the Tea Party movement is like those responsible for the 1970 Kent State shooting. Cohen claimed a “language of rage” fuels the Tea Party and took shots at Glenn Beck and New York gubernatorial candidate Carl Paladino.

Violent Video, an Attempt at Humor?

After sparking outrage over the violent video, 10:10 pulled the video and issued an apology which read in part: “At 10:10 we’re all about trying new and creative ways of getting people to take action on climate change. Unfortunately in this instance we missed the mark … Oh well, we live and learn.”

The 10:10 UK climate group, which has several corporate sponsors including Sony, Kyocera Mita and O2, along with a number of celebrity supporters, claimed the video was supposed to be humorous. 10:10 said its sponsors did not have prior knowledge of the video and Sony issued a statement condemning the video as “ill-conceived and tasteless” and said they were “disassociating” from the group.

Kyocera Mita is reconsidering its partnership with 10:10 and said they were “very shocked by the movie.”

“We wanted to find a way to bring this critical issue back into the headlines whilst making people laugh,” said more of 10:10’s apology. But is humor a valid defense for portraying the murder of people who disagree with you?

That was the basic defense Jim Edwards of CBS Interactive’s BNet gave for the video. Edwards said, “No one but the most extreme climate change denier believes this is actually what environmentalists want. It’s obviously just a joke outrageous enough to actually get people’s attention.”

WSJ’s Taranto wrote that “one may hope that Jim Edwards is right when he denies that ‘this is actually what environmentalists want.’ But it’s bad enough that this is what they fantasize about — and that they manifestly felt no inhibition about airing such a depraved fantasy in public.”

Given statements by other warming activists in the past about executing, jailing or trying skeptics or wanting to reduce the world population, the video shouldn’t be funny anymore.

Skeptics have many reasons to view the video as a threat since environmental extremists have long sought to punish them for their dissent.

“We should have war crimes trials for these bastards – some sort of climate Nuremberg,” David Roberts of the environmentalist Grist Magazine wrote, describing the climate change “denial industry.” NASA’s James Hansen also called for trials for “high crimes against humanity” in 2008. Robert F. Kennedy Jr. attacked skeptics in 2007, calling it “treason.”

In 2009, an article on the liberal Talking Points Memo website attacked skeptics as “greedy bastards” and asked how such people should be punished when they “have caused it to be too late to fix the problem, and we start seeing the devastating consequences …”

The headline of that anonymous article was chilling: “At what point do we jail or execute global warming deniers.”

Some environmentalists simply want massive population reduction because of the damage they say humans are inflicting on the planet. Paul Watson, founder and president of the Sea Shepherd Conservation Society and famous for militant efforts to stop whalers, warned in 2007 that mankind is “acting like a virus.”

“We are killing our host the planet Earth,” Watson claimed as he called for the world population to drop below 1 billion. Watson didn’t care about the 5.5 billion people that would need to die in order to meet that goal.

10:10’s video also wasn’t the first environmental ad campaign to use chillingly violent imagery to make its point. TreeHugger.com displays a gallery of “coolest environmental advertising” from 2009. The “provocative” ad that “deserves to lead” the slideshow, according to TreeHugger, was an image of a young girl with a noose around her neck standing on a melting iceberg.

Last year, a “grassroots group” called Plane Stupid released a grizzly advertisement showing polar bears falling from the sky, being bloodied as they bounce off skyscrapers and ultimately crash to death on the streets of an unidentified city. After that sickening video, the screen goes black and the anti-carbon message is revealed: “An average European flight produces over 400kg of greenhouse gases for every passenger … that’s the weight of an adult polar bear.”

The group wants to end see an end to airport expansion, aviation advertising and “sustainable” transport.

Media Rationalize or Ignore Ugly Side of Environmentalism, Skeptics Concerned

But the liberal news media often downplay or ignore threats of violence and extreme rhetoric from the eco-left. In the case of “No Pressure,” one national newspaper’s environmental blog ignored the controversy even while talking about environmental activism.

The Los Angeles Times Greenspace blog wrote about environmental events happening on 10/10/10. But it focused on lefty Bill McKibben of 350.org and his Global Work Party and failed to mention the same event going on in Britain or the violent propaganda advertising it. Since the exploding children video, McKibben has distanced himself from the 10:10 UK group.

Andrew Revkin took a different tack on October 4 on The New York Times’ Dot Earth blog. Revkin, senior fellow at Pace Academy for Applied Environmental Studies, was critical of the video, but managed to dream up a conspiracy theory involving Big Oil.

After saying that the environmental campaigners succeeded in shocking people and forcing some people (himself included) to write about the video, Revkin said: “Then again, it could be a conspiracy. Perhaps the filmmakers were simply highly-paid double agents for big oil and big coal trying to undercut the global effort of the similarly named 10-10-10 campaign kicking off Oct. 10. (The 10:10 group is one of the thousands of participants in the international climate ‘work party’).”

It’s unclear whether Revkin was being sarcastic about such a conspiracy, but what is clear is the way he tried to downplay the seriousness of the disturbing video and rationalize it away. He quoted a media professor who called the controversy simply a “generational divide over violent imagery.”

He quoted another mocking people upset by the film for not having a sense of humor, and two more people who actually found “No Pressure” to be “funny.”

Revkin also quoted Marshall Herskovitz, a past president of the Producers Guild of America who attacked “deniers,” saying: “The deniers will deny until the moment they either stop making money from it, or they truly understand that they are dooming their children … I envy the deniers, really, for they are not yet compelled to see the terrible truth: That there is no time left for us to fail.”

“Many are still defending it as satire, just humor. The problem Megyn, is this expresses a very deep sentiment in their movement of wanting to get rid of and silence global warming skeptics,” Morano said before citing examples including Grist’s call for Nuremberg-style trials of skeptics.

“Let’s hope eco-snuff films are not the future,” Morano concluded.

Heartland Institute president Joseph Bast told the Business & Media Institute he is concerned about potential attacks on skeptics – including those within his organization – stemming from this film.

“I was shocked when I saw this video, and immediately sent an email to all of Heartland’s staff warning them that it could encourage environmental extremists to physically attack us,” Bast said. “This overt call for violent action against global warming realists has absolutely no place in civilized dialogue on climate change, or any other public policy issue. Calling on others to consider using violence to silence those who disagree with you is itself an act of violence.”

Bast also said that the makers of the video are responsible for whatever “eco-terrorist acts” occur in the coming months. “We can only pray that no one gets hurt, and that similar acts of violence do not occur in the future.”

In Case You Missed It:  Cases of vaccine-induced VAIDS on the rise due to mass covid vaccination
Posted in Freedoms and tagged Freedom, Global Warming, Liberalism, United Kingdom.