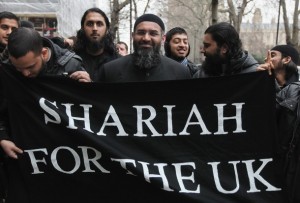 Network reporters, Hollywood celebrities and the pundit class would have seized the moment as an example of the evils of America’s supposed Christian theocracy. The story would have been tied to the dangers of evangelical religion and likely even to the Tea Parties. Across the oceans, radical Islamists would do as they did during the Koran burning episode or after the Danish cartoons were published. They would riot. Cars, businesses and maybe even embassies would burn. People would die.

Thankfully, that didn’t happen. What did happen is far scarier.

ABC News held a townhall meeting, bringing on experts from left and right to ask the question: “Should Americans fear Islam?”

Thanks to ABC, we know the answer. Americans absolutely should. One of the network’s “experts” was Muslim cleric Anjem Choudary, who Britain’s Sunday Times called “the leader of the now-outlawed extremist group Islam4UK.” His comments on “This Week” bore out everything conservatives criticize about radical Islam. “We do believe as Muslims the East and the West will be governed by the Sharia,” Choudray said. “Indeed we believe that one day the flag of Islam will fly over the White House.”

According to Choudary, “Islam has a solution for all of the problems that mankind faces.”

You don’t need to read between the lines to know what he was talking about. That is, if you could find those lines anywhere. Our allegedly unbiased media have done almost nothing with the story. No network used the clip except ABC and that was just in its original program. Only two major newspapers mentioned it, and none of the top papers – New York Times, Washington Post, etc.

Even ABC, which aired the program, tried to spin things against conservatives. Host and pro-Islamist Christiane Amanpour told one guest that “a series of politicians have used the Islamic center, have used sort of Islamophobia and scare tactics in their campaigns.” The dictionary calls a phobia “a persistent, irrational fear.” There’s nothing irrational about fearing radical Islam. It’s stupid not to do so.

Instead, the only things the media fear these days are the continued decline of their profession, and the rise of the Tea Parties. You can find a story bashing Tea Party folks for not recycling. That kind of petty criticism is to be expected. The media hate them.

If you laid all of the lefty/media attacks against the right end to end, they’d probably reach all the way to Mecca. Convenient that. The Tea Party people alone have been called “racist,” “crazy,” “nuts,” “unusual,” “mental” and “screwballs.” And those are the ones mild enough for print.

But when a representative of radical Islam goes on a major network and calls for global domination, you’d think that, too, would make news. Instead, all we got was ABC chastising conservatives like the Rev. Franklin Graham for pointing out the dangers of radical Islam. Another guest, Reza Aslan, a scholar and a contributing editor and The Daily Beast, said Graham’s position “is actually the definition of bigotry.”

Meanwhile, radical Islam was doing its part to remind us of the dangers and the costs of its efforts. The world is on alert because of yet another Islamic-linked terror attempt. This time, a group of al Qaeda spinoffs seems to have been planning attacks on five European airports. CNN reported “police in France seized 12 people for suspected terrorist ties.”

On Oct. 3, the State Department “issued an alert warning for Americans traveling to Europe to be vigilant about possible terrorist attacks,” according to Bloomberg. Around the same time, several foreign militants training in Pakistan were killed by a U.S. drone. CNN reported “the militants killed are believed to have been members of the group Jihad al Islami.” (Imagine if the group name had been Crusaders for Christ.”)

Let’s not forget that the attempted Times Square bomber also just got life in prison, but not before sounding a warning that sounds significantly like Choudary’s. Convicted terrorist Faisal Shahzad told the judge: “We are only Muslims … but if you call us terrorists, we are proud terrorists, and we will keep on terrorizing you,” he said, adding that “the defeat of the U.S. is imminent,” according to The Washington Post.

A separate Post article noted U.S. airline stocks had been unharmed by talk of a terror attack.

What the story didn’t mention was … this time. Because there is always a next time. The media won’t discuss the potential harm those attacks would have, not just to life, but to the economy already battered by Washington’s liberal leadership.

Finally, how many terror attacks will it take before the media stop blaming America and start blaming radical Islam? The sad answer is: too many.

Dan Gainor is The Boone Pickens Fellow and the Media Research Center’s Vice President for Business and Culture. His column appears each week on The Fox Forum. He can also be contacted on FaceBook and Twitter as dangainor.