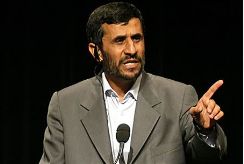 Israel would find itself without widespread support from the American public for United States reprisals against Iran if Tehran attacks the Jewish State, according to a new CBS poll.

Only 15 percent of the respondents would support an American counter-attack if Iran were to limit its attack to Israel, although another 13 percent said that the United States should attack Iran if it conducts a nuclear weapons test. Presumably, some or all of the same 13 percent might also back a strike if Israel were attacked, bringing the theoretical total to 28 percent.

Approximately 25 percent would support American retaliation if the Islamic Republic were to strike on American soil, and a similar number said an attack on the U.S.fleet in the Persian Gulf, where approximately half of the world’s oil and gas supplies flow, would be enough to justify reprisals.

The results of the poll by CBS’ 60 Minutes program and Vanity Fair magazine showed surprising anti-war sentiment. Nearly a quarter of the respondents said they “would never support” a war with Iran.

The poll is particularly significant because the Congressional midterm elections are only four weeks away, and President Barack Obama is struggling to fight off what the polls show will be a severe voter rebellion against his Democratic party.

Surveys have shown that voters are concerned with domestic issues, particularly health and the economy, and have little interest in Israeli affairs and the Iranian nuclear threat. President Obama’s new appointment of White House Chief of Staff  Peter Rouse, replacing Rahm Emanuel, reflects a strategy to focus less on foreign policy issues.

The CBS poll also covered the Ground Zero Mosque, and 63 percent said they agree with opponents to the planned Muslim religious community center near Ground Zero. Only 30 percent expressed backing for the developers of the project.

Following are the results of the poll on Iran:

Which would cause you to support a war with Iran?

Moshe Arens: Israel Can Say ‘No’ to Obama

by Tzvi Ben Gedalyahu Professor Moshe Arens, former Israeli Ambassador to the United Nations and Defense Minister in the Gulf...