The advice appears in “Inspire,” the latest issue of a slick Islamic propaganda publication by Al Qaeda in the Arabian Peninsula, Osama Bin Laden’s franchise in Yemen. 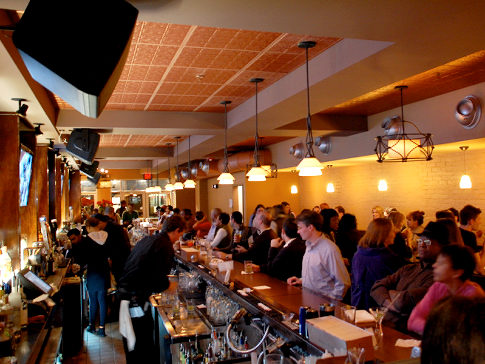 “A random hit at a crowded restaurant in Washington, D.C., at lunch hour might end up knocking out a few government employees,” Yahya Ibrahim writes in the 74-page jihadi how-to kill kaffirs magazine.

“Targeting such employees is paramount and the location would also give the operation additional media attention,” Ibrahim added.

Other trash talk came from “Samir Khan,” an American who came to AQAP from North Carolina, who produces the publication and wrote that he is “proud to be a traitor in America’s eyes.”

“This guy is bad news, and given the fact that he helps publish AQAP trash, he certainly spreads a lot of it around, too,” said a senior U.S. official.

According to a copy of the magazine obtained by the SITE intelligence group, AQAP also urged those bent on murdering for Islam to use everything from pickup trucks to improvised pressure-cooker bombs to kill anyone they can.

The trucks can be fashioned into “the ultimate mowing machine,” with steel blades welded to the grill to “mow down the enemies of Allah” by running down Americans on crowded sidewalks “to achieve maximum carnage” in a “martyrdom operation.”

“This method has not been used before,” advises AQAP in its “Tips for our brothers in the U.S.”

Ibrahim praised the killings of a dozen victims at the U.S. Army post in Texas allegedly committed by accused homegrown terrorist Maj. Nidal Hasan, who was in contact with and inspired by U.S.-born AQAP cleric Anwar al-Awlaki.

In 1993, Pakistani killer Mir Aimal Kasi opened fire on CIA employees at a stoplight, who were targeted because their cars were in a turn lane for the agency’s Virginia headquarters.

Concerns over Islamic extremism are ever increasing, as Europe went on alert just weeks ago, with plans of Muslim to kill Europeans in Airports and Hotels. A survey by the Pew Global Attitudes Project finds that in most majority-Muslim countries surveyed, support for suicide bombings and other acts of violence in defense of Islam has declined although the numbers of Muslims that support Islamic terrorism are still shockingly high.

In Case You Missed It:  Kamala Harris Called Riots "A Movement" Last Summer, Said "They Should Not" Stop
Posted in Terrorism and tagged al-Qaida, Ideology, Islam, Muslims, Terrorism, U.S. Capitol.

I am a Traitor to America Because My Religion Requires Me

'I am proud to be a traitor to America': U.S. citizen mocks his homeland in 'Al Qaeda magazine'. An American...