Just as new owners were about to move in, the previous owners of a foreclosed house in Simi Valley, Calif. reoccupied it with locksmith, attorney and camera crew in tow. 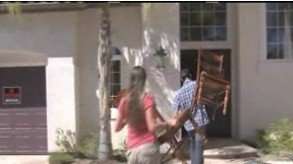 Investors who had purchased the home at a lender’s trustee sale had been hoping to have its new owners in it this week. But Jim and Danielle Earl and their nine children returned to the home because, she says, she believes it will be difficult for their family to find another permanent place to live if they comply with a court order to vacate the home. That order, says their lawyer, was the end result of fraud.

“They broke in and are proceeding to squat in there,” listing agent Chris Garvin of Troop Real Estate, told HousingWatch.

The Earls originally purchased the house for $500,000 in March 2001. Due to some refinances to take out equity, they owed at least $880,000 on a no-interest mortgage loan by the time of foreclosure.

“When we were evicted we went to the Extended Stay America because they were the only hotel around that would let us have that many children, and a dog and two cats,” Danielle Earl, 44, told HousingWatch. “We split up into two hotel rooms for a month.” She is the part owner of a medical devices company and her husband is a stay-at-home dad. After their hotel stay they moved to a short-term rental, but their credit issues would keep them from obtaining a property that would permanently suit their needs, she said.

But the bigger issues, says their attorney, Michael Pines, is that the lender fraudulently foreclosed upon their six-bedroom, five-bath home. “When I felt comfortable from a legal standpoint that they had a basis for moving back in, they did so on my recommendation,” says Pines.

Garvin was not only the listing agent but also the acquisition and sales partner for his client, Conejo Capital Partners, the investors. He says that he purchased the home in good faith for $697,000 in January on behalf of his client, at an auction on the courthouse steps.

After gaining possession through eviction in July, his clients spent $40,000 rehabbing the home. Carpets were replaced, appliances updated, and granite countertops added. “The living condition was disgusting,” he says. But once cleaned up, it went under contract to new buyers for $800,000. All other questions were referred to his attorney, Stan Yates, who had not responded to HousingWatch by publication time.

Danielle Earl (pictured) says that she and her husband have been foster parents to 43 children over the years and they currently home-school most of their school-age children (six of whom are adopted). So she admits that the walls were probably a bit scuffed and in need of a paint job, and some of the carpet was worn. But, she says, she and her family only had a day to collect their things and have movers haul it away, so it’s not like they were leaving the home in a show-ready state. About arriving back home Saturday, she says: “It was such an emotional moment. Everyone started hugging each other and crying.”

Since possession doesn’t necessarily mean ownership, the Earls still have a battle on their hands, says Pines, who says they were denied a trial by jury to argue why they never should have been foreclosed upon — and their eviction from the 2000-built home was unwarranted.

“The bank used the usual fabricated and forged documents to foreclose,” the Earls wrote in their court petition, in which they describe signatures by bank personnel that do not match, from document to document — an indication to them that documents were not properly reviewed and were fabricated.

“We needed to get back in before the investor and the real estate broker moved in a new family,” says Pines. “I didn’t want to allow the situation to become worse, and we show up and we have to try to throw them out. Danielle and Jim would not have wanted to throw them out.”

The Earls question who owns the loan, as the foreclosure documents list GRP Financial Services, but there have been several lenders listed in the past few years. The original lender was Washington Mutual Bank, which became JPMorgan Chase after the banks merged. The loan went to Bank of America on the same day that Chase sent the homeowners a notice of default. The Earls argue that Chase never properly assumed the loan and thus did not have the right to sell it off. And in turn, the investors, Conejo Capital Partners, did not properly purchase the property either.

The courts generally can ignore a foreclosure sale when there has been fraud or the sale was improperly conducted.

The Earls, who admit to having fallen behind on their mortgage at one point due to a loss of income in Danielle’s business, say that they were working with the bank to catch up on their payments. However, she says, whenever they made a payment it was not being reflected on statements, even a $12,500 catch-up payment was not credited to the balance due. Ultimately, there was a $25,000 discrepancy between what they thought they still owed in arrears and what the bank said they owed.

Garvin testified at court that he successfully bid against four others for the property, and on Feb. 5 served the Earls with a three-day notice to vacate the property, and they failed to do so at that time. They are charging the Earls approximately $4,000 a month rent, or about $133 per day for their extended stay beyond that date.

Pines says that he can’t predict if the real estate investor will again evict the Earls, but adds, “I think that is unlikely.” His firm, Pines & Associates, will be filing a lawsuit “against everybody,” he says.

Even if Conejo Capital Partners were a purchaser in good faith, the Earls believe that the investor group must still prove that the foreclosure process itself was proper.

The Earls, however, are just happy to be back in their home. “My kids have been begging to go home and we’re finally home,” said Danielle Earl.