AMSTERDAM- Populist politician Geert Wilders’s negative views of Islam – he has called it “retarded” and “inherently violent” – are his opinions, not irrefutable facts, Dutch prosecutors argued yesterday at his criminal trial for inciting hatred.
Wilders has argued that his views of Islam are supported by expert and academic analysis, and that speaking the truth cannot be a crime. He says the charges against him are an attack on freedom of speech. 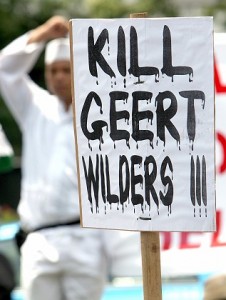 But at the second hearing of his closely watched trial, prosecutors countered that there is no general agreement about the nature of Islam, and Wilders’s statements are opinions that cross the legal threshold.

However, prosecutors have dropped one charge against him, of insulting a group on the basis of its religion, noting that his statements have been mostly directed toward Islam as an ideology, rather than Muslims.

He is still charged with inciting hatred and discrimination against Muslims. Under Dutch law, it is illegal to insult or incite hatred against a group of people on the basis of gender, religion, race or sexuality. Muslims appear for now to get a free pass promoting hatred of Westerners in Mosques and in public protests inside The Netherlands..

Prosecutor Birgit van Roessel said: “What he puts forward is, and remains, his individual opinion, and just like with any expression of opinion, we can test whether it falls under the right to freedom of expression or whether it is a transgression of the criminal code.” Wilders is the most popular politician in The Netherlands due to his straightforward talk about Islam.

The case against Wilders is based on dozens of public statements. Typical among them were views he published in an opinion piece in the national newspaper De Volkskrant.

As recently as August he repeated his view that Islam is inherently violent and backward.

In a television interview, he said: “Our culture, which is based on Christianity, Judaism and humanism, is better than the retarded Islamic culture, and this is tough to say, but it is true. It is a violent ideology like communism and fascism and we should deal with it that way.”

Wilders – who polls suggest is the Netherlands’ most popular politician – denies wrongdoing. He says his opinions are protected by freedom of speech and endorsed by more than a million people who voted for him in national elections last June.

Without addressing any of Wilders’s specific remarks, Ms Van Roessel said freedom of speech has limits.

She said: “You can expect a politician to be aware of the impact of his words, and in any case, the legal limit may not be crossed, no matter how important it may be to address supposed problems and to contribute to matters of general interest.”

Prosecutors had initially declined to act on complaints and press charges against Wilders at all.

But an appeal court ruled there was sufficient evidence that he has broken the law, and ordered them to bring a case.

The defence is due to present its case next week. A verdict is expected on 5 November.

The trial comes at the height of Wilders’s influence on public policy. Later this week a conservative minority government is expected to take office, propped up by a pledge of support by Wilders’s Freedom Party. The new government has promised to reject more asylum seekers; halve the number of new immigrants from non-western countries; ban the public wearing of face-concealing Muslim garments and force immigrants to pay for their own – mandatory – citizenship classes.

Muslims, mostly from Morocco and Turkey, comprise about 6 per cent of the Netherlands’ 16.5 million population.

In Case You Missed It:  WHOOPS: George W. Bush Suffers Brutal Freudian Slip – “The Decision of One Man to Launch a Wholly Unjustified and Brutal Invasion of Iraq” (VIDEO)
Posted in Terrorism and tagged Amsterdam, Freedom, Geert Wilders, Muslims, Terrorism.

by Chana Ya'ar France has threatened to recognize a unilateral declaration of statehood by the Palestinian Authority if final status...