‘I am proud to be a traitor to America’: U.S. citizen mocks his homeland in ‘Al Qaeda magazine‘.

An American citizen has written about his pride at leaving the U.S. and joining Al Qaeda in Yemen.

In Inspire – an English-language magazine produced by Al Qaeda supporters on the Arabian Peninsula – Samir Khan mocks the U.S. intelligence agencies and pledges his support to the terrorist group. 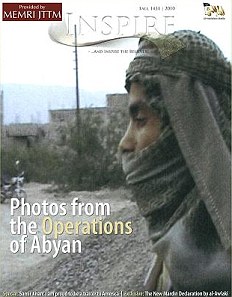 U.S. officials believe the 24-year-old from from North Carolina is the driving force behind the magazine, which includes articles on conducting attacks and features messages from terrorist leaders.

In an article entitled ‘I am Proud To Be a Traitor to America’, Mr Khan describes his decision to leave the U.S.

‘I praise Allah and laugh at the intelligence agencies that were watching me for all those years. Back in North Carolina, the FBI dispatched a spy on me who pretended to convert to Islam,’ he writes.

‘I am a traitor to America because my religion requires me to be one.

‘We pledge to wage jihad for the rest of our lives until either we implant Islam all over the world or meet our Lord as bearers of Islam.’

Mr Khan claims to be ‘Al Qaeda to the core’ and said he could ‘no longer reside in America as a compliant citizen.’

The 24-year-old also attacks the U.S. for ‘kill[ing] millions of Muslims around the world’ and ‘get[ting] away with it wearing a tuxedo.

The first edition of the magazine was released back on July, the latest version includes pieces claiming to have been written by Osama Bin Laden and radical cleric Anwar Al-Awlaki, a prominent member of Al Qaeda on the Arabian Peninsula – the group which has claimed responsibility for the failed Christmas Day bombing of a Northwest Airlines plane over Detroit last year

The group has also been linked to the attack at the U.S. Fort Hood military base in Texas in 2009 which resulted in the deaths of 13 people.

The October edition of Inspire includes a story on operations against Yemen’s military forces.

According to the private SITE Intelligence Group the magazine also includes an article entitled ‘The Ultimate Mowing Machine’, which describes how to use a pickup truck ‘as a mowing machine, not to mow grass, but mow down the enemies of Allah’.

‘To achieve maximum carnage, you need to pick up as much speed as you can while still retaining good control… to strike as many people as possible in your first run,’ the article allegedly states.

Yemeni scholar Christopher Boucek, from the Carnegie Endowment for International Peace, is quoted as saying the magazine and recent YouTube videos showed AL Qaeda were ‘broadening their potential audience’.

‘They are brilliant at amplifying their message,’ he added.

In the introduction to the latest magazine, the editors boast of ‘recent U.S. assessments’ that declared Al Qaeda of the Arabian Peninsula ‘one of the most dangerous branches’ of the terror group.

It concludes: ‘You haven’t seen anything yet.’

AMSTERDAM- Populist politician Geert Wilders's negative views of Islam - he has called it "retarded" and "inherently violent" - are...