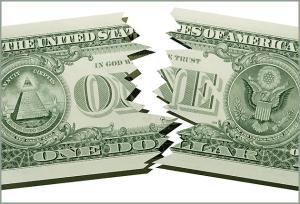 The United States has piled on so much debt that world is going to abandon the dollar, says Jim Grant, founder and editor of “Grant’s Interest Rate Observer.”

“By the numbers, we are more encumbered now than we have ever collectively been,” Grant tells the Business Insider.

The United States debt has soared to the point where people can expect to see the dollar get the same reaction as in the 1970s, Grant tells the Business Insider. He said that European hoteliers in the Carter years would ask American tourists if they could pay in anything but greenbacks.

“The world has expressed preference for currencies not called the dollar. It’s happened,” he told the Business Insider.

Economists often grab headlines disagreeing with one another about the fate of the U.S. economy, with some experts such as Paul Krugman arguing for more stimulus to kick-start a recovery while others, such as Niall Ferguson, arguing debt is already out of hand.

For Grant, nobody knows what is going to happen.

“My perspective is that people in this business may be experts on up to what has happened up until this minute, but we and the cab driver are all equally ignorant about what will happen,” he says.

The only thing for sure is that the world will avoid the dollar.

If the world continues to invest in dollars given U.S. debt levels, cash injections and low interest rates, “they would be an unusual set of creditors.”

The dollar has fallen recently, including hitting a 15-year low against the yen after sluggish unemployment figures increased expectations that the government will inject cash into the economy, which weakens the currency.

“The market is in a state of anxiety over what’s likely to come from the Fed,” Lee Hardman, a foreign-exchange strategist at Bank of Tokyo-Mitsubishi UFJ in London, tells Bloomberg.

Why Not Barack Obama?

Posted by Erick Erickson Last evening, the President of Chile called out by name two world leaders for special thanks...