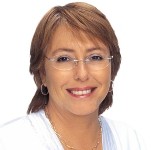 Last evening, the President of Chile called out by name two world leaders for special thanks for their support — British Prime Minister David Cameron and Israeli Prime Minister Benjamin Netanyahu.

Barack Obama’s name was not mentioned.

Barack Obama, purported leader of the free world, resides in the Western Hemisphere with the Chilean President and is supposedly restoring American greatness in the world.

But our thin skinned leader is probably not upset. Given his contempt of mining, Great Britain, and Israel, I’m sure he has no problem at all not being mentioned by name.

Recommendations of The Conservative Papers for the California November Propositions

For our readers in California, bring this handy guide with you to the polls. By Tom McClintock Prop 19: When...