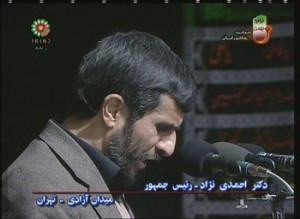 Tehran’s Mehrabad airport on Saturday coming back from Lebanon, Iranian President Mahmoud Ahmadinejad affirmed that Israel will cease to exist and added that the hegemonies forces are vacuum and they should know that the day will come and Israel will disappear. The victory is near and resistance is the only way to reach triumph. The citizens of southern Lebanon will decide the future of the region he said adding that they took their decision and said it aloud to the whole world. Iran supports the resistance of the Lebanese people he said uttering that he hopes that the day will come when the Mahdi, the redeemer promised in Shiite Islam, will come and spread justice in the world.
Posted in Israel, Terrorism and tagged Ahmadinejad, Iran, Israel, Muslims, Terrorism.

President Barack Obama's polygamist half brother in Kenya has married a woman who is more than 30 years younger than...