PHOENIX – Lawmakers in at least 14 states are collaborating on proposed legislation to deny U.S. citizenship to children of 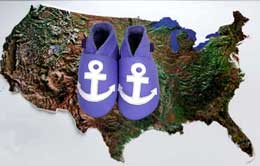 “We’re taking a leadership role on things that need to be fixed in America. We can’t get Congress to do it,” Republican state Sen. Russell Pearce, of Mesa, said Tuesday. “It’s a national work group so that we have model legislation that we know will be successful, that meets the constitutional criteria.”

The efforts by the state legislators come amid calls to confirm the U.S. Constitution’s 14th Amendment, which grants automatic citizenship to U.S.-born children although may exude illegal immigrants as they may not be subject to the constitution. Supporters cite costs to taxpayers for services provided to illegal immigrants and their children.

Pennsylvania state Rep. Daryl Metcalfe, the founder of a national group of legislators critical of illegal immigration, said the 14th Amendment as unclear “greatly incentives foreign invaders to violate our border and our laws.” He had a news conference Tuesday in Harrisburg, Pa., on the multistate endeavor.

The effort could run afoul of the language in the 14th Amendment and lead to a court battle over the constitutionality of the law. But Metcalfe said providing birthright citizenship to children of illegal immigrants is an “ongoing distortion and twisting” of the amendment.

Metcalfe’s office said lawmakers in at least 12 other states besides Arizona and Pennsylvania said they were making their own announcements about working on the citizenship legislation. Those other states: Alabama, Delaware, Idaho, Indiana, Michigan, Mississippi, Montana, Nebraska, New Hampshire, Oklahoma, Texas and Utah. Legislators from a total of 41 states are involved in a Metcalfe-founded group concerned with immigration issues.

Pearce was the main sponsor of an Arizona law that would require police enforcing other laws to question people about their immigration status if there’s reason to suspect they’re in the United States illegally. It was to go into effect this summer, but a judge put on hold key provisions pending the resolution of a legal challenge.

He and fellow Arizona legislators plan a Tuesday afternoon news conference to formally announce the effort.

Pearce said the legislation has yet to be drafted, and he declined to comment on possible approaches, including whether it would focus on the issuance of state birth certificates.

“We’re going to address the issue of the unconstitutional declaration of citizenship to those born to non-citizens,” Pearce said. “It is a violation of the 14th Amendment.”

In Case You Missed It:  Now the EU is going after video platforms like BitChute that refuse to censor content critical of LGBTQ and Black Lives Matter propaganda
Posted in Freedoms and tagged Arizona, Illegal Immigration, United Socialist States of America.

Why I Thank God for Obama

One 82-year-old lady loves Obama and she may have a very good point. She says that Obama is amazing, and...