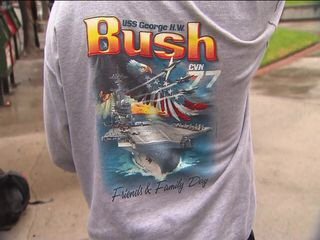 A California union stagehand was abruptly terminated Friday for wearing a “George H. W. Bush” sweat shirt and hat while constructing a stage to be used for a get out the vote rally featuring President Barack Obama.

Duane Hammond says his clothes were not a political statement, rather a sign of support for his son, who is serving on the aircraft carrier U.S.S. George H. W. Bush.

“I’m just humiliated,” Hammond said. “My son has been in the Navy for three years, he’s serving proudly, and I’m wearing his flag, so to speak.”

That explanation did not sit well with Hammond’s supervisor, who said either the shirt, which bears a large image of the aircraft carrier, went or he would.

“And because it said Bush I was told to go home and either turn my sweatshirt inside out,” the man said. “But first they made me take off my hat.”

In Case You Missed It:  Prime age mortality SPIKED by 50% across multiple states during the year of the "life-saving" covid-19 vaccine
Posted in Freedoms, Tyranny and tagged Democrats, Freedom, Liberalism, Obama.