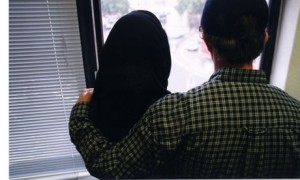 Jack and Zena Briggs . . . her family hired a bounty hunter to find them. Photograph: Garry Weaser for the Guardian

If you are a Muslim woman hoping to flee a forced marriage or potential honor killing in Europe, think twice about hailing a cab during your escape. The latest from Norway:

Some people in the taxi business report young immigrant women and jeopardize their safety.

“Our experience is that many of the girls are afraid to take a taxi. They say that the family works in the taxi business. If the women are seen in the city, it’s reported back to the family,” Gunnar Svensson of the Oslo police told NRK.

Svensson, who serves on the government unit combating forced marriages, warns that “in cases where people are exposed to threats, our advice is not to take a taxi. It’s simply a security risk.”

The cab-driving honor Stasi is not limited to Norway. The Telegraph noted in 2008 that “informal networks of taxi drivers” are “involved in assisting and covering up ‘honor violence’ in Britain.” Two months ago, the Guardian profiled Zakir, a UK cabbie who “for around £5,000 … would track down women and girls who had run away from home to escape a forced marriage. A bounty hunter, Zakir’s mission was to bring them back to their families”:

It wasn’t about the money. It was about izzat [honor]. I saw the effect it had on them when their daughter ran away. The worry and the shame from the community talking about them. I was part of the “taxi driver network,” so we shared information about who we picked up and where they got dropped off.

Denmark witnessed the worst possible result of this phenomenon in 2005, when taxi drivers helped a fellow Pakistani locate his sister. He then shot her to death and injured her husband, a day after they had been married without her family’s approval.

“Families will do anything in the name of honor,” says Zakir. Western authorities must show similar resolve in thwarting the aims of such families and their community enablers.