The latest move by Ben Bernanke and his Federal Reserve is rubbing a lot of people the wrong way. Bernanke plans to inject more liquidity into US markets in the latest round of quantitative easing, which is being dubbed QE2 (we’ll get to what it actually means in a minute). While there has been a strong current of dissenting murmurs domestically, the most vocal outcries has come from abroad.  Germany, Brazil, Russia, Turkey, and China have been the loudest critics, with the German finance minister calling the move “clueless.” At a time of increasing globalization, angering our trading partners is certainly not the fastest path toward prosperity. 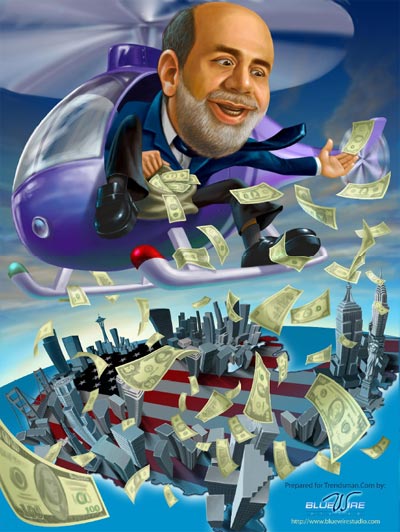 QE2 is the regime in which the Federal Reserve will be pumping $600 billion into the economy during the next several months. In doing so the Fed will purchase five to ten year Treasury bonds at a clip of $75 billion per month. The idea is to flood the market with cash by buying up U.S. debt.

Now for some background. Typically the Federal Reserve sets the price of money through the manipulation of interest rates. These rates effect the cost of loans paid by companies, the cost of mortgages for houses, and the return on saving money. Higher interest rates make borrowing less attractive and saving more attractive. Lower rates do the opposite. But as of now the Federal Reserve has lowered interest rates as low as they can go. And yet the economy isn’t acting like the Fed wants. The answer to their conundrum has been to come up with the process called “quantitative easing” in which the Federal Reserve creates new money out of thin air. With this new money it will buy government bonds – the result being that the price will rise and the interest rate (yield) will go down. When interest rates go down companies can essentially borrow money at cheaper prices. The hope is that this will encourage spending.

A side effect is that it will likely create a level of inflation that will devalue U.S. exports. While “devalue” is not something that sounds like a benefit – it does boost exports as our prices become more internationally competitive. Bernanke also argues that with the extra cash in the markets, US companies can afford to spend more money on employees and fuel the job growth the US desperately needs right now.

But remember, these are all “ifs.” There are serious risks associated with quantitative easing, including hyperinflation, and a limited chance of success, because to a significant degree it relies on investor confidence in its ability to work.

The international community is against the idea because the end result of the policy appears eerily similar to the same currency manipulation that allowed China to have a favorable trade deficit. Germany has criticized the move saying that it is “indirect manipulation” of the currency. Moreover, they say that the policy won’t work to jumpstart the economy. Germany’s Finance Minister Wolfgang Schaeuble said that, the “U.S. policy is clueless. [The problem] is not a shortage of liquidity. It’s not that the Americans haven’t pumped enough liquidity into the market.”

The stated goal of QE2 is to increase inflation, or layman’s terms to lower the value of one’s currency.  It is the same as a corporation seeking to improve its bottom line by offering new shares. The value of the company remains the same while the number of shares are increased, thus the value of each share decreases. Now, low-to-moderate inflation (less than 2%) is arguably a good thing. With prices going up it is a signal that there is not enough supply – thus it encourages producers to enter the market. It also greases the wheels of the economy by allowing for adjustments that are very hard to make under zero-inflation. But while moderate inflation is arguably good, high inflation, which often spirals into hyperinflation, is inarguably disastrous. Since the U.S. dollar is the reserve currency of choice, any destabilization of its price is a cause for concern from world economies.

Perhaps the deepest worry of the international community is the creation of “bubbles.” The tsunami of money that the Fed unleashed isn’t just isolated to American markets; it is also washing up on the shores of other states.  The triumvirate bubbles – stocks, bonds, and commodities – have serious distortionary impacts on the world economy. The Dow Jones Industrial Average has risen by an average of about 12% since Bernanke hinted about QE2. Stocks, overall, have increased by almost 20%. Portfolios have seen $1.2 trillion in paper gains since then as well.  The dollar has declined in value against the Euro by 10%. Commodity indexes have jumped by 20%. Oil is being traded at a two year high, and gold has reached a nominal high of $1,400 per ounce.

The problem with bubbles is that they pop. When cheap money flows into the hands of investors they put in various investments such as commodities or emerging markets. The increased investment has the potential to drive up prices. The problem is that at their core the asset is being overprices. We saw the formation of an asset bubble in the United States real estate market where prices soared but the underlying value of the house didn’t. When the bubble popped and home prices fell, the economy sunk. The creation of cheap money threatens to do the same thing all over again in other nations, particularly developing ones. That is why Germany and the gang don’t want ‘hot-money excess’ to corrupt their higher yielding currencies, nor do they want artificial bubbles proliferating across the global economy.

The transatlantic and transpacific rifts are growing. President Obama, who won the Nobel Peace Prize, for “extraordinary efforts to strengthen international diplomacy and cooperation between peoples,” is leading the charge for a monetary policy that may spark an economic war. Obama and the Democratic leadership are becoming more ideologically isolated in a domestic sense. Now, his economic policies, which stand in sharp contrast to the majority of the developed world threaten to isolate us from the rest of the world.

The rest of the world has come to the conclusion the majority of America has reached: liberal policy is threatening to destabilize our economy. In attempting to recover from their own Keynesian nightmare, European nations are frozen in fear by the world’s leading economy failing to learn from their mistakes. Last Tuesday the Democratic bubble popped, hopefully the White House and the Federal Reserve will come to their senses before the United States’ days as a world economic power does the same.[youtube PTUY16CkS-k nolink]

A strong sense of pessimism shrouded the start of an economic summit of rich and emerging economies Thursday, with President...