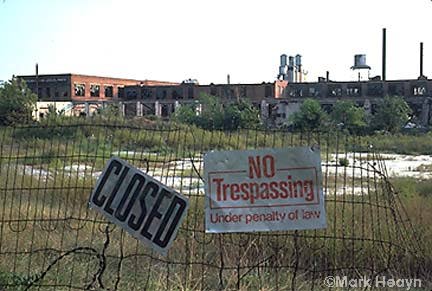 The United States is rapidly becoming the very first “post-industrial” nation on the globe. All great economic empires eventually become fat and lazy and squander the great wealth that their forefathers have left them, but the pace at which America is accomplishing this is absolutely amazing. It was America that was at the forefront of the industrial revolution. It was America that showed the world how to mass produce everything from automobiles to televisions to airplanes. It was the great American manufacturing base that crushed Germany and Japan in World War II.

But now we are witnessing the deindustrialization of America. Tens of thousands of factories have left the United States in the past decade alone. Millions upon millions of manufacturing jobs have been lost in the same time period. The United States has become a nation that consumes everything in sight and yet produces increasingly little. Do you know what our biggest export is today? Waste paper. Yes, trash is the number one thing that we ship out to the rest of the world as we voraciously blow our money on whatever the rest of the world wants to sell to us. The United States has become bloated and spoiled and our economy is now just a shadow of what it once was. Once upon a time America could literally out produce the rest of the world combined. Today that is no longer true, but Americans sure do consume more than anyone else in the world. If the deindustrialization of America continues at this current pace, what possible kind of a future are we going to be leaving to our children?

Any great nation throughout history has been great at making things.. So if the United States continues to allow its manufacturing base to erode at a staggering pace how in the world can the U.S. continue to consider itself to be a great nation? We have created the biggest debt bubble in the history of the world in an effort to maintain a very high standard of living, but the current state of affairs is not anywhere close to sustainable. Every single month America goes into more debt and every single month America gets poorer.

So what happens when the debt bubble pops?

The deindustrialization of the United States should be a top concern for every man, woman and child in the country. But sadly, most Americans do not have any idea what is going on around them.

For people like that, take this article and print it out and hand it to them. Perhaps what they will read below will shock them badly enough to awaken them from their slumber.

The following are 19 facts about the deindustrialization of America that will blow your mind….

1 The United States has lost approximately 42,400 factories since 2001. About 75 percent of those factories employed over 500 people when they were still in operation.

2 Dell Inc., one of America â€™s largest manufacturers of computers, has announced plans to dramatically expand its operations in China with an investment of over $100 billion over the next decade.

3 Dell has announced that it will be closing its last large U.S. manufacturing facility in Winston-Salem, North Carolina in November. Approximately 900 jobs will be lost.

4 In 2008, 1.2 billion cell phones were sold worldwide. So how many of them were manufactured inside the United States? Zero.

5 According to a new study conducted by the Economic Policy Institute, if the U.S. trade deficit with China continues to increase at its current rate, the U.S. economy will lose over half a million jobs this year alone.

6 As of the end of July, the U.S. trade deficit with China had risen 18 percent compared to the same time period a year ago.

7 The United States has lost a total of about 5.5 million manufacturing jobs since October 2000.

8 According to Tax Notes, between 1999 and 2008 employment at the foreign affiliates of U.S. parent companies increased an astounding 30 percent to 10.1 million. During that exact same time period, U.S. employment at American multinational corporations declined 8 percent to 21.1 million.

10 Ford Motor Company recently announced the closure of a factory that produces the Ford Ranger in St. Paul, Minnesota. Approximately 750 good paying middle class jobs are going to be lost because making Ford Rangers in Minnesota does not fit in with Ford’s new “global” manufacturing strategy.

12 In the United States today, consumption accounts for 70 percent of GDP. Of this 70 percent, over half is spent on services.

13 The United States has lost a whopping 32 percent of its manufacturing jobs since the year 2000.

14 In 2001, the United States ranked fourth in the world in per capita broadband Internet use. Today it ranks 15th.

15 Manufacturing employment in the U.S. computer industry is actually lower in 2010 than it was in 1975.

16 Printed circuit boards are used in tens of thousands of different products. Asia now produces 84 percent of them worldwide.

18 One prominent economist is projecting that the Chinese economy will be three times larger than the U.S. economy by the year 2040.

19 The U.S. Census Bureau says that 43.6 million Americans are now living in poverty and according to them that is the highest number of poor Americans in the 51 years that records have been kept.

So how many tens of thousands more factories do we need to lose before we do something about it?

How many millions more Americans are going to become unemployed before we all admit that we have a very, very serious problem on our hands?

How many more trillions of dollars are going to leave the country before we realize that we are losing wealth at a pace that is killing our economy?

How many once great manufacturing cities are going to become rotting war zones like Detroit before we understand that we are committing national economic suicide?

The deindustrialization of America is a national crisis. It needs to be treated like one.

If you disagree with this article, I have a direct challenge for you. If anyone can explain how a deindustrialized America has any kind of viable economic future, please do tell me how.

America is in deep, deep trouble because of the progressives folks. It is time to wake up and get prepared.

Whether these changes are good or bad depends in part on how we adapt to them. But, ready or not,...