The conventional wisdom in Washington and in most of the rest of the world is that the roaring Chinese economy is going to pull the global economy out of recession and back into growth. It’s China’s turn, the theory goes, as American consumers — who propelled the last global boom with their borrowing and spending ways — have begun to tighten their belts and increase savings rates. 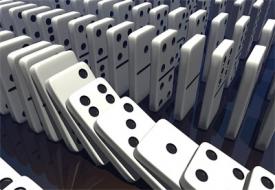 The Chinese, with their unbridled capitalistic expansion propelled by a system they still refer to as “socialism with Chinese characteristics,” are still thriving, though, with annual gross domestic product growth of 8.9 percent in the third quarter and a domestic consumer market just starting to flex its enormous muscles.

That’s prompted some cheerleading from U.S. officials, who want to see those Chinese consumers begin to pick up the slack in the global economy — a theme President Barack Obama and his delegation are certain to bring up during next week’s visit to China.

“Purchases of U.S. consumers cannot be as dominant a driver of growth as they have been in the past,” Treasury Secretary Timothy Geithner said during a trip to Beijing this spring. “In China, … growth that is sustainable will require a very substantial shift from external to domestic demand, from an investment and export-intensive growth to growth led by consumption.”

That’s one vision of the future.

But there’s a growing group of market professionals who see a different picture altogether. These self-styled China bears take the less popular view: that the much-vaunted Chinese economic miracle is nothing but a paper dragon. In fact, they argue that the Chinese have dangerously overheated their economy, building malls, luxury stores and infrastructure for which there is almost no demand, and that the entire system is teetering toward collapse.

A Chinese collapse, of course, would have profound effects on the United States, limiting China’s ability to buy U.S. debt and provoking unknown political changes inside the Chinese regime.

The China bears could be dismissed as a bunch of cranks and grumps except for one member of the group: hedge fund investor Jim Chanos.

Chanos, a billionaire, is the founder of the investment firm Kynikos Associates and a famous short seller — an investor who scrutinizes companies looking for hidden flaws and then bets against those firms in the market.

His most famous call came in 2001, when Chanos was one of the first to figure out that the accounting numbers presented to the public by Enron were pure fiction. Chanos began contacting Wall Street investment houses that were touting Enron’s stock. “We were struck by how many of them conceded that there was no way to analyze Enron but that investing in Enron was, instead, a ‘trust me’ story,” Chanos told a congressional committee in 2002.

Now, Chanos says he has found another “trust me” story: China. And he is moving to short the entire nation’s economy. Washington policymakers would do well to understand his argument, because if he’s right, the consequences will be felt here.

Chanos and the other bears point to several key pieces of evidence that China is heading for a crash.

First, they point to the enormous Chinese economic stimulus effort — with the government spending $900 billion to prop up a $4.3 trillion economy. “Yet China’s economy, for all the stimulus it has received in 11 months, is underperforming,” Gordon Chang, author of “The Coming Collapse of China,” wrote in Forbes at the end of October. “More important, it is unlikely that [third-quarter] expansion was anywhere near the claimed 8.9 percent.”

Chang argues that inconsistencies in Chinese official statistics — like the surging numbers for car sales but flat statistics for gasoline consumption — indicate that the Chinese are simply cooking their books. He speculates that Chinese state-run companies are buying fleets of cars and simply storing them in giant parking lots in order to generate apparent growth.

Another data point cited by the bears: overcapacity. For example, the Chinese already consume more cement than the rest of the world combined, at 1.4 billion tons per year. But they have dramatically ramped up their ability to produce even more in recent years, leading to an estimated spare capacity of about 340 million tons, which, according to a report prepared earlier this year by Pivot Capital Management, is more than the consumption in the U.S., India and Japan combined.

This, Chanos and others argue, is happening in sector after sector in the Chinese economy. And that means the Chinese are in danger of producing huge quantities of goods and products that they will be unable to sell.

The Pivot Capital report was extremely popular in Chanos’s office and concluded, “We believe the coming slowdown in China has the potential to be a similar watershed event for world markets as the reversal of the U.S. subprime and housing boom.”

And the bears also keep a close eye on anecdotal reports from the ground level in China, like a recent posting on a blog called The Peking Duck about shopping at Beijing’s “stunningly dysfunctional, catastrophic mall, called The Place.”

“I was shocked at what I saw,” the blogger wrote. “Fifty percent of the eateries in the basement were boarded up. The cheap food court, too, was gone, covered up with ugly blue boarding, making the basement especially grim and dreary. … There is simply too much stuff, too many stores and no buyers.”

In Case You Missed It:  Trump Supporters Raise over $100K to Save AOC's Abuela's Ancestral Home
Posted in Financial and tagged Bankruptcy, China, Debt Crisis, Depression.

Muslim Hajjis Cry ‘Death to America! and ‘Death to Israel!’ at Annual Pilgrimage

Tens of thousands of Muslims chanted “Death to America” and “Death to Israel” at the annual Hajj pilgrimage, which the...