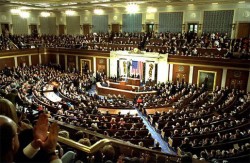 Do you remember the days when getting elected to Congress or choosing to work for the government was referred to as “public service”? The idea was that you would be making a sacrifice for the greater good of the country. Well, those days are long gone. Today, getting elected to Congress or working for the federal government is a good way to get rich. Median household income in the United States fell from $51,726 in 2008 to $50,221 in 2009, and yet the personal wealth of members of Congress and the salaries of federal workers (especially at the higher levels) continue to explode. A lot of corrupt politicians and federal fat cats are raking in stunning amounts of cash, and we are the ones paying the bill. There is certainly nothing wrong with making a lot of money, but does it seem right that so many of our “public servants” are getting filthy rich while so many of the rest of us are barely getting by?

Posted below are 12 facts that will blow your mind. Most Americans have no idea just how obscenely wealthy many members of Congress are, and most Americans are totally clueless about how cushy some of these U.S. government jobs are. If there is one place in America where the good times are still rolling (other than Wall Street), it would have to be Washington D.C.

Members of Congress and employees of the government are supposed to work for us. We are the ones who pay their salaries. But today, they are the ones “living the dream” while most of the rest of us scramble just to survive from month to month….

#3 More than half of the members of the U.S. Congress are millionaires.

#4 The total compensation that the U.S. government workforce is going to take in this year is approximately 447 billion dollars.

#5 Today, all members of Congress earn at least $175,000. This is far, far more than the average American makes.

#6 60 percent of the federal government workforce is represented by labor unions.

#9 Insider trading is perfectly legal for members of the U.S. Congress – and they refuse to pass a law that would change that.

#10 According to a recent study conducted by the Heritage Foundation, federal workers earn 30 to 40 percent more money on average than their counterparts in the private sector.

#11 When you factor in such things as retirement and health care benefits, the compensation gap between federal workers and private sector employees gets even larger. Just consider the following quote from the Heritage Foundation study mentioned above…. “Including non-cash benefits adds to this disparity. The average private-sector employer pays $9,882 per employee in annual benefits, while the federal government pays an average of $32,115 per employee.”

#12 The personal wealth of members of the U.S. Congress collectively increased by more than 16 percent from 2008 to 2009.

So can the U.S. government continue to afford to shell out nearly half a trillion dollars to federal employees every single year?

The truth is that the U.S. government is flat broke and yet most of our politicians still seem extremely resistant to consider anything that would even slow down the wild spending that has been going on.

So what do we get for the $447 billion that we are spending on federal workers every single year?

Not a whole lot – unless you consider paperwork, bureaucracy and a gigantic pile of ridiculous regulations to be a good thing.

America needs a fundamental shift in attitude. Instead of expecting a “nanny state” to take care of us, we should desperately try to reshape the federal government into a much smaller entity that will finally get off our backs.

We have been living beyond our means for decades, and we cannot afford to pay for this bloated behemoth of a government for much longer.

Hopefully Americans will wake up and do something about this nonsense before it is too late. Because right now the federal government has become an out of control monster that is gobbling up everything in sight.

The debate over the TSA security measures comes down to two options. Either subject everyone to strip searches or accept...