Almost two weeks ago an unidentified missile was launched from somewhere off the coast of Los Angeles, and wide speculation as to what the hell it was has followed. A leading theory is that a Chinese missile launched from a submarine. The Chinese have spent the last 30 years building their army and economy and it is now time to put it to work. Why? Because they have no other choice, due to the currency wars initiated by the United States. This is by far the most important and under reported story in the world today, and I’m going to attempt to spit out a quick summary of what’s a goin’ on. 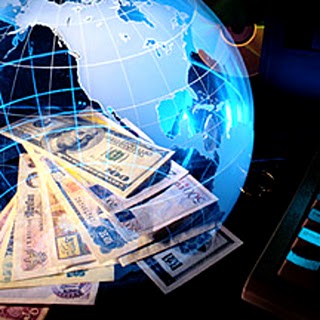 So Obama is doing his Asian trip to India and now to South Korea for the G20 Summit, and his main objective, and that of the G20 summit in general, is to address and hopefully stop the Currency Wars before they begin, but it is too late, the USA has already engaged itself, because it left itself no other choice.

We all know USA doesn’t produce anything anymore, and if you go into a Home Depot or Target or Best Buy or any other store and check where everything was made in it, 95% of it was made in China. Now, after 10 years of heavy trade gains, China has billions of US dollars that they received for the cheap goods and slave labor. Unfortunately, there is nothing they can do with them. Usually, two separate nations or empires trade with each other, but not in this case. There is simply nothing China can buy with US dollars, so they spend dollars on US Treasury Bonds.

WTF is a Treasury Bond anyways? It’s an IOU, you buy bonds from your city or municipality or state or country, and in 10 years you are supposed to receive your money back plus earnings. This happens a lot, say your city is low on money, they issue 10 year bonds with 10% gains, people with savings buy them, and the city gets by for the time being. If after 10 years the city decided, for whatever reason, not to pay back the bonds, there would be riots, that is the only possible outcome. No politician is going to allow that to happen, his name would be tarnished and he would be run out of office, so it never happens. But now we owe trillions of T-bills to China, and guess what? We can’t repay it, and they know it. So China has gone down from slowly buying Treasury bonds to not buying them to quietly selling them–to anyone who wants them.

Here comes the currency wars part. You may have heard terms such as bailouts, “quantitative easing,” TARP, and now QE2. Really simply, here’s whats up. Ben Bernanke is chairmen of the Federal Reserve, which is a private institution run by a board of directors who are the CEO’s of the five largest banks in the USA. They are, with a computer, typing in a number, in the case of the first bailout TARP program, that number was 700,000,000 US Dollars. They issue this money to the US Government in exchange for 700,000,000 Treasury Bonds that no one but the Federal Reserve will accept anymore. That was in 2008, now they just did it again for 600,000,000 dollars. These dollars are directly inserted into the private banks that make up the federal reserve at in interest rate of 0.25%. That’s a really small number. This might sound crazy that CEOs of banks are allowed to print money and give it to themselves and use it to give everyone who opens a checking account $100 cash (which Chase is still doing) or buy smaller banks who were not given any money by the Federal Reserve. But what does this have to do with a missile being fired off the coast of California?

Every time you print a new dollar, the value of every dollar already in circulation decreases. If you print 700 billion and then 600 billion in just two years, a lot of people are going to hear about it, and because of that the value of the dollar goes down. It’s still a dollar, but you cannot purchase as much with it, this is inflation. This is why gas and wheat and pork and everything prices for everyday staple items is increasing, unless you think pigs cost more to raise now. China, the single highest owner of US Dollars, is the largest loser in this event, and the US Banks are the biggest winners. Now, the trillions of US Dollars that China has, which it has been using to buy real stuff like South African corporation-government rights to rare mineral mines, South American ports and the Panama Canal, US real estate and mortgage bundles, but now those dollars are starting to be worth less and less compared to the Chinese currency Yuan. And here lies the real problem.

You would think that with such a trade surplus that China wouldn’t care about the value of US Dollars so much, but the USA has one huge advantage to China: The US Dollar is the world’s leading currency, it is the only one traded in every country including China, and its value determines the price of everything, including oil. If the value of the dollar drops, the price of everything goes up, including other currencies, such as the Yuan or the Euro. Think of what that means for every trade exchange between Europe and USA, or between China or USA. We print a lot of US Dollars, give it to them, and they have to give us the much more valuable Yuan. They get worthless dollars, we get a currency with real worth. If I had a printing press, and you knew it, would you want to trade with me? In response, China must print more Yuan, lowering its currency’s value in order to keep up. This is a currency war.

Simply put, USA owed China much more money than it could over hope to pay back. Likewise, the USA owes the federal reserve more money than it could ever pay back (the huge deficit of 10 trillion + is owed to someone after all). There are 2 options: renege on the debt, tell China you won’t or can’t pay them back, probably after a few years of not answering calls. Not the best option, because you are telling the world you are bankrupt and no one will ever trade with you again. Good bye bananas. Option 2 is the one we are taking, just print the money! You can pay anyone whatever they want if you got a printing press, and that’s what we’re doing. Banks decided to give out risky loans and give them AAA ratings and sell them to each other and get insurance on them and it all failed? Shit, let’s just print a butt load of money, give it to ourselves, give the risky mortgages to the US Gov’t, keep all the good assets, and look we’re all making record profits again, score! Meanwhile, China is like WTF, you can’t just print a bunch of money and give it to us, it’s totally fucking up our currency because we have to switch to US Dollars to trade with any country in the world. So they print more Yuan to counter, and US prints more, and they print more, and hyperinflation comes.

So here comes the meat. At this summit, Obama drops this bomb, ““China spends enormous amounts of money intervening in the market to keep it undervalued so what we have said is it is important for China to follow a market-based system,” the U.S. President said. “We have to understand that this is not solved overnight. But it needs to be dealt with and I am confident it can be.”

Get that? It’s so obviously bs that everyone at the summit knows it, why? Because Obama has the audacity to say that the US is strictly adhering to the “market-based system” and China is “undervaluing” the Yuan. Well, everyone and their mother knows that just last week, not 5 days before Obama goes to Seoul to say this, the US flooded its banks with 600 billion more dollars, pumping money into the system artificially. Where yesterday there was an empty room, today it’s filled with 600 billion bucks, this is not a market based solution, this is a country “spending enormous amounts of money intervening in the system.” This is a political slap in the face, and China can either take it like a bitch, allow US to keep dumping dollars in the market, and be forced to do the same, or they can show USA what’s up, take a sub within 30 miles of the US coast totally undetected, send a missile straight up, and be like what bitch. As a side note, on Nov 9th, 2007, exactly 3 years to the day of this missile event, this happened:

“American military chiefs have been left dumbstruck by an undetected Chinese submarine popping up at the heart of a recent Pacific exercise and close to the vast U.S.S. Kitty Hawk – a 1,000ft supercarrier with 4,500 personnel on board. By the time it surfaced the 160ft Song Class diesel-electric attack submarine is understood to have sailed within viable range for launching torpedoes or missiles at the carrier. According to senior Nato officials the incident caused consternation in the U.S. Navy. The Americans had no idea China’s fast-growing submarine fleet had reached such a level of sophistication, or that it posed such a threat.”

It’s not that China intends to attack USA (yet) it’s just a sign that they could.

U.S.A In Decline: A Society In Denial

During the 1950s and 1960s, the United States was the richest and most envied country in the world. It was...